Should wheelchairs have priority over pushchairs on buses? I ask because a man is taking his case to the Supreme Court after he sued a bus company when he wasn’t allowed to board a bus because a mum with a buggy refused to move.

Appeal judges ruled that the mum was within her rights not to move her sleeping baby in a pram that wouldn’t fold, and the wheelchair user wasn’t unlawfully discriminated against, but he disagrees and wants the decision overturned. 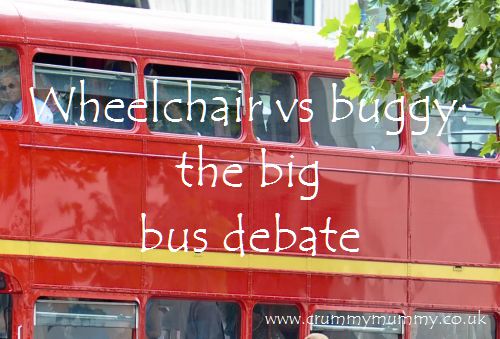 His case has been allowed because it raises an issue of public importance, which I think is exactly right: isn’t it time bus companies install designated buggy areas on buses, totally separate from the wheelchair area?

As a mum who takes a pushchair on a bus every afternoon on the school run (one of the reasons I hate the school run) I can see the argument from both sides.

Of course buggy-pushing parents should move over or collapse their pushchairs to make way for wheelchair users if they possibly can. Wheelchairs have priority and the area is there for them.

But collapsing a pushchair on a bus is often simply not practical. My pushchair is routinely loaded down with shopping, nappy bag, BB’s book bag and PE Kit, which would need to be stowed somewhere before I could collapse the pushchair (which folds into two pieces), and where are you supposed to put the baby while all this is going on?

But mums and dads also wait nervously at bus stops hoping the wheelchair area isn’t already occupied because it’s the only area of the bus they can travel in too, and if it’s occupied they can’t travel either. I’ve lost count of the number of times I’ve been unable to board a bus because the area is full and I’ve had to wait for the next one to come along.

If there were separate wheelchair and buggy areas, some of this anxiety would be alleviated – particularly for the wheelchair user as there tend to be more buggies on buses than wheelchairs.

Stickers on our buses declare ‘small prams only’, which immediately makes you question the size of yours and feel like you’re an inconvenience, and just this week I boarded a bus only for the man next to me to mutter ‘bloody pushchairs’ as I manoeuvred mine into position (expertly, I might add). I looked him in the eye and gave him my brightest smile, the miserable old s*d.

But the miserable old s*d aside, until there are separate designated areas for wheelchairs and pushchairs the wheelchair vs buggy debate is going to rear its ugly head again and again.

I’ll be really interested to see what the Supreme Court judges make of it.