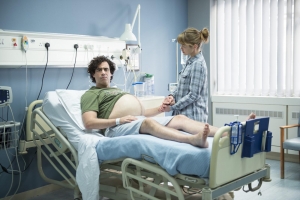 Last week I had one of the most bizarre evenings I think I’ve ever had: I watched the actor Stephen Mangan ‘give birth’ in a London hotel with a group of Mumsnet bloggers. Even more bizarrely, it’s not as weird as it sounds.

Mangan is starring in a new TV show called Birthday, in which he’s about to give birth, and we were treated to a private screening with the man himself before the programme officially airs on Tuesday June 9. And believe it or not, the story is actually believable.

In Mangan’s world medicine has advanced to the point that with the help of hormones and an artificial womb men can carry a baby to full term, after which the baby enters the world via a c-section (totally plausible, right?)

The only problem is, in Mangan’s case, the theatre at the over-stretched NHS hospital where he and wife Lisa (played by Anna Maxwell Martin) choose to have their baby girl is busy dealing with emergencies, so already induced he’s forced to endure labour until a slot becomes free.

As a mum who has given birth twice I must admit I watched this with glee. If only men knew what labour is actually like! But the hilarity of Mangan’s swollen boobs and grudge at having only been allowed one unit of alcohol for the past nine months is soon replaced with anguish as it’s revealed the reason Mangan is carrying their baby, and not wife Lisa, is because she can’t have any more children after she was ‘mutilated’ (his words) giving birth to their son, in which both nearly died.

Naturally both fear ‘the worst’ will happen second time round, leading to frayed tempers and frustration with their hapless midwife as the labour progresses, the cord gets stuck around the baby’s neck and the theatre is still full.

Forget One Born Every Minute or your average TV labour scene, this programme captures the tedium and the waiting around during labour perfectly. It turns out the script is based on writer Joe Penhall’s own birth story, and is adapted from his 2012 Royal Court play.

Viewers are left in no doubt about his feelings towards the NHS. He said after the screening: “The NHS runs on good will, and I do think when it comes to childbirth it’s wrong to exploit people’s good will. For me it was manifestly obvious we got short measure, but if you leave hospital with a healthy baby it redeems it. The NHS does exploit the fact that the one sector of society who won’t complain are new mums.”

You will laugh out loud – Mangan, complete with hairy prosthetic belly, must endure rectal examinations – and you will cry, and by the end of the show you’ll feel like you were actually the in the delivery room and went through the birth with them. You’ll even forget it was actually the man giving birth, which no longer seems odd at all.

Is it a happy ending? I’m not going to be a spoil sport – you’ll have to find out for yourself…

Birthday will be shown on Sky Arts at 9pm on Tuesday June 9.