That’s the reason many new mums decide to stop breastfeeding in the first six months of their baby’s life according to the latest Channel 4 Dispatches programme Breastfeeding Uncovered, looking at breastfeeding rates in UK. 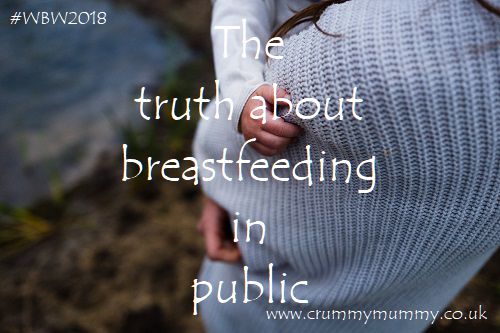 In the programme, shown ahead of World Breastfeeding Week, new mum Kate Quilton (the blonde one from Food Unwrapped) sets out to find out why UK breastfeeding rates remain the lowest in the world.

While 80% of mothers in the UK start off breastfeeding, by six months that figure drops to 25% and at one year just 0.5% of mums are still breastfeeding – that’s one in 200.

According to the experts Kate speaks to in the programme many women cite negative attitudes towards breastfeeding in public as one of their reasons for giving up breastfeeding, and in a (very unscientific) experiment she sits on a bench in a shopping centre breastfeeding her baby son.

She later tells the camera the experience left her feeling like a ‘social outcast’ and a ‘leper’, retreating to the comfort of her own home to feed instead.

The thing is though, that hasn’t been my experience at all.

I am one in 200. As a mum of three who has exclusively breastfed for a combined total of almost six years and counting I have never once had a negative experience breastfeeding in public.

Broken nights, bleeding nipples, tongue tie & endless pumping – no one said breastfeeding was going to be easy, but nothing quite prepared me for how rewarding it was going to be either. Contented snuffles, milk drunk cheeks & watching them grow on nothing but my milk alone. I’ve managed to exclusively breastfeed all three of my babies thanks to support & expertise from the likes of @medela_uk & that’s why I’m proud to join the likes of @mrsgifletcher & @mrs_izzyjudd to be #milkinit! #breastfeeding #breastfeedingmama #breastfedbaby #medela #MedelaMums #coolmumclub #perfectandproud #documentyourdays

A post shared by Natalie Brown (@confessionsofacrummymummy) on Jun 3, 2017 at 3:02am PDT

I have never felt like a social outcast or a leper, and I have never (knowingly) had anyone tutting at me or been on the receiving end of disapproving looks or stares. And I’ve breastfed in some pretty public places. 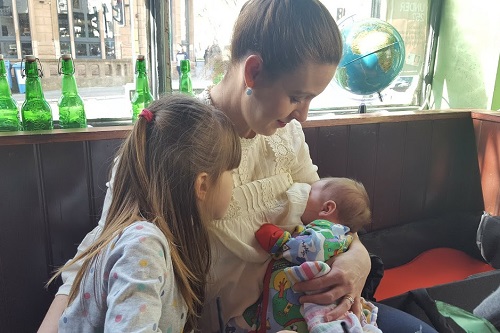 Perhaps I am blind and deaf to it, perhaps it’s down to where we live (the so-called ‘liberal playground’ of Brighton and Hove) or perhaps I’ve simply been lucky. Or perhaps attitudes aren’t as negative as we’re led to believe.

‘Yes I’m STILL breastfeeding’. I lost count of the number of times I found myself saying that with baby number one & baby number two, but as baby number three approaches her first birthday it occurred to me I don’t think I’ve said it once. Are attitudes finally changing? I do hope so! #breastfeeding #breastfeedingmama #breastfedbaby #thismamaloves #childhood #childhoodunplugged #capturingchildhood #capturingtheday #lethembelittle #oureverydaymoments #documentyourdays @medela_uk

While I applaud programmes like Dispatches for shining a light on the issue of breastfeeding – because a light does need to be shone on it if breastfeeding rates in the UK are to be improved – I question how helpful (and true to life) the broadcast of Kate’s experience breastfeeding in public was.

With hair perfectly coiffed, make-up expertly applied and a camera crew at her heel she was bound to draw attention – with or without a baby plugged to a boob. The cameras were quite clearly there to capture public opinion, and passers-by played to those cameras. It’s human nature. A breastfeeding mum like me with hair scraped into the default mum-bun with no make-up and nothing but a buggy at her heel is unlikely to garner so much attention.

Don’t just take my word for it…

Kate’s experience isn’t reflective of some other breastfeeding mums I know, either. I asked some fellow parenting bloggers to share their experience of breastfeeding in public and here’s what they said:

“We’ve been breastfeeding 25 months and often in public, especially in the first year,” says Helen at Natural Beauty with Baby. “I’ve never received a comment, good or bad, which I’m so pleased about as it’s nobody else’s business, really! The more we breastfeed in public, the better!”

“I am currently breastfeeding my eight-month-old and he is my second breastfed child and I can so far happily say that I’ve not ever had a bad experience when feeding in public,” says Emma at Emma Reed. “Even if someone did have something to say I would be more than happy to put them straight! No one will stop me doing what I need for my baby.”

“I remember the time I had to plonk myself at the outside section of coffee shop at a garden centre when I had Zach and a month-old Oscar with me,” says Lisa at Mumma Scribbles. “I sat down to feed him because he was screaming and I could feel the eyes of the elderly lady on the next table on me. At first I thought she was uncomfortable, but then as she was leaving, she popped over to me and asked if I wanted her to get me a cup of tea!”

“In 18 months I’ve been lucky to only ever receive positive reactions to my breastfeeding in public,” says Megan at Oatcake Adventures. “I wondered if it was down to the area that we lived in where breastfeeding rates are high, so I actually felt a little anxious breastfeeding in a supermarket cafe on holiday in Devon. I saw an elderly man and his wife walking straight for me midway through their shopping and I thought it would be my first negative experience – but actually he said how wonderful it was to see someone breastfeeding their hungry baby in the shop! Made my day!”

“I’ve been breastfeeding for nearly three and a half years now and tandeming for one,” says Charlotte at Looking After Your Pennies. “I’ve fed all over the place and only ever had positive experiences. Restaurants have offered to keep my dinner warm while I feed and I get asked if I want glasses of water. Plus I get lots of soppy looks from people.”

“I’ve been breastfeeding my eight-week-old in public since birth and have only really had positive experiences, mostly from staff and people asking if they can get me anything,” says Sophie at Soph-obsessed.

“I have breastfed all my three kids – my youngest is four years old and still nurses,” says Veronica at My Parenting Journey. “I like it when positive people smile and try to assist me when I breastfeed.”

“I breastfed my three-year-old for 15 months,” says Emma at Building with the Breretons. “I was so nervous at first. I remember very clearly the first time I did it in public. I was at The Trafford Centre and I was incredibly anxious. Then, like a sign from the Universe, I saw a lady walking around John Lewis with her boob on full show and her young baby latched on. She didn’t have a care in the world. I felt in that moment that she was my hero! It gave me the confidence to feed in public. I later bought a breastfeeding cover but not because I felt I had to, it just made me feel more comfortable.”

“I used to breastfeed publicly and given the size of my boobs when feeding there was no hiding it!” says Laura at Power of Mum. “The hardest time was having to breastfeed on the tube – my son and I were both really uncomfortable. I also had to breastfeed on a plane and accidentally sprayed the passenger next to me when my son violently latched off – luckily she was a fellow mum who just laughed. I often waited for my negative comment but it never came.”

What do you think? Did you see the Channel 4 Dispatches programme? Do you have experience of breastfeeding in public and was it good or bad? I’d love to hear about your experience!

World Breastfeeding Week runs from August 1 – 7 2018. To find out more visit www.worldbreastfeedingweek.org or search for the hashtag #WBW2018. 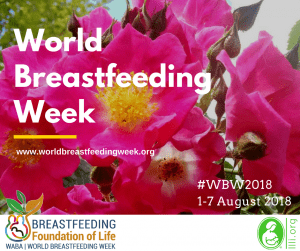 5 great reasons to breastfeed beyond one

10 things you should never say to sleep deprived mum