‘Twintastically smug and perfect’. That’s just one of the (many) criticisms I’ve levelled at Topsy & Tim’s mum in the past.

Not so long ago she made it onto my list of top five kids’ characters who make me want to scream – alongside Mog’s mum and Daddy Pig – for being so frustratingly, annoyingly and infuriatingly good. 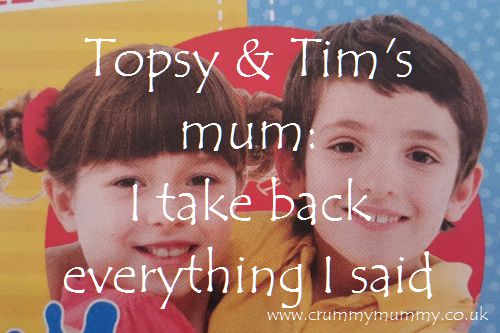 But it turns out I was wrong. Topsy & Tim’s mum is still frustratingly, annoyingly and infuriatingly good, but I don’t hate her after all. I take back everything I said, and here’s why.

This weekend we were invited to the Teletubbies 20th anniversary birthday party at the British Film Institute in London, where everyone who’s anyone with a child under five gathered for fun and games and a special preview screening from the upcoming new series of the show.

Among the famous faces who turned out for the event were Nick Knowles, Linda Robson, Austin Healey, Claire Sweeney – and Topsy & Tim’s mum, aka actress Anna Acton.

Bearing in mind Littlest B was born just 12 days ago on Valentine’s Day it’s fair to say I wasn’t feeling my best – I haven’t had a decent night’s sleep in almost two weeks now and physically I still feel like I’ve been in a car crash if you know what I mean (I’ll spare you the gory details).

Add to that the fact Misery Guts and I are now outnumbered – keeping your eyes on an over-excited five-year-old and a hyper two-year-old both intent on running in opposite directions while one of you holds the baby in a jam-packed room which is getting hotter by the minute is far easier said than done.

It wasn’t long before I slumped on the nearest chair with Littlest B while Misery Guts attempted to keep tabs on the other two, and do you know what Topsy & Tim’s mum said to me?

After admiring Littlest B, looking genuinely shocked when I told her how old she was and marveling at the fact we’d made it into central London already, she told me I looked ‘amazing’.

I’m quite sure I didn’t, but that’s not the point. The point is, mum to mum, she genuinely seemed to know what it had taken to make it there and what to say to make me feel better.

So from here on in I vow never to say a bad word about Topsy & Tim’s mum ever again.

Even though Topsy & Tim still have a lot to answer for, and even though Misery Guts, who has a long-standing crush on Topsy & Tim’s mum (along with half the nation’s dads if Mumsnet’s chat room is anything to go by), declared she looks ‘even better’ in real life than on the telly.

The thing is he’s right and she does look even better in real life than on the telly, and while I should probably be frustratingly, annoyingly and infuriatingly irritated by this, for some reason I’m just not…

Is there a kids’ character or TV show that drives you up the wall? Have you started out hating a character and ended up loving them? I’d love to know!