Topsy & Tim have got A LOT to answer for 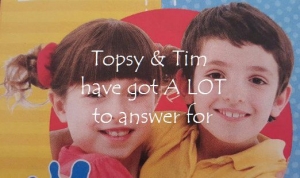 BB keeps asking me when the tooth fairy is going to visit her, but given that she only turned four in August and that according to Mrs Google milk teeth typically fall out at five or six she could be waiting a while.

I told her this (I didn’t quite deliver it like that) and she protested that ‘that’s AGES’ and pointed out that Topsy and Tim are only four and the tooth fairy has been to see them.

I’m sure the tooth fairy has indeed been to see them, but that’s because there’s NO WAY they’re only four (see Life Love and Dirty Dishes for a hilarious post on the 5 misdemeanours of Topsy & Tim) and are pushing six if not seven at least.

“But it’s not fair, Topsy and Tim have seen the tooth fairy!” has been the constant chime at bedtime this week and I’ve been trying to placate her by saying we just have to be patient. Then last night her face lit up and she said: “I know, mummy, if we don’t brush my teeth at bedtime then they’ll get holes in and fall out sooner.”

So now – along with getting knots out of hair and pyjamas on – we’ve got a new battle on our hands at night: tooth brushing.

Topsy & Tim have got A LOT to answer for.