Things they fail to tell you about toddlers 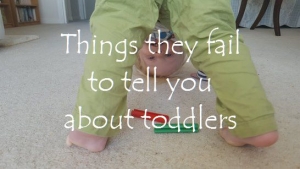 We’ve had one of THOSE weeks. A pooey, pukey, two baths a day and soaking of clothes in the kitchen sink sort of a week. Little B still isn’t quite over his non-specific virus (why oh why do they call it that? Being sick is quite specific to me!) plus he’s teething which doesn’t help matters at all.

I think it’s fair to say my patience has been tested more in the last week than it has in the last year, and it’s got me thinking that there are an awful lot of things they fail to tell you about toddlers.

1. Somewhere between 12 and 18 months old baby sick stops smelling like baby sick and starts smelling like grown-up sick, making you literally retch when clearing it up. It will also stain wherever it has the misfortune to fall, and those things will never be quite the same again. I’ve never seen that little nugget of information in a baby book.

2. Explosive nappies requiring full strip down, a bath, and new clothes always happen just when you’re on the way out of the door or really need to be doing something else. Just count to ten and…breathe.

3. If you’re unlucky, at around the same time as the sick, your little bundle of joy will learn to grind their teeth. And if you’re really unlucky they’ll like doing it and do it over and over again. Like nails down a blackboard.

4. Then at the same time as the teeth grinding they’ll develop a Screech of Frustration. Little B’s Screech of Frustration comes when he either wants something or wants to communicate something, but can’t. So he simply screeches while pointing at nothing in particular. Goodness only knows what the neighbours think.

5. On some days all of the above will happen on the same day, either consecutively or all at the same time. But then, when he’s clean and dry and calm and sweet smelling again, he’ll spontaneously come over and climb into my lap for a cuddle, and maybe even proffer up his snotty face for a kiss. And, weirdly, I don’t really mind doing it all over again. 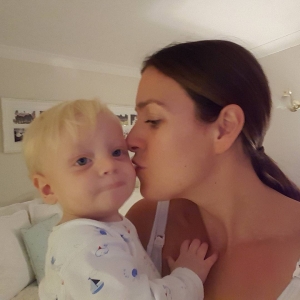 Is there anything you wish you’d known about toddlers before you found yourself in charge of one?