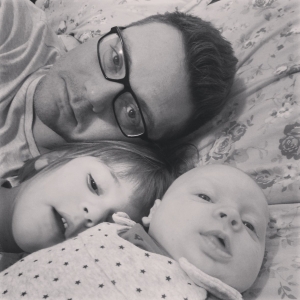 Last weekend I spent my first night away from Little B. I went on a longed-for spa break for my mum’s birthday, and while I couldn’t wait for my first proper night’s sleep since Little B was born in October, leaving my little family overnight isn’t as straightforward as it sounds.

Regular readers will know Misery Guts has Type 1 diabetes. This means his pancreas doesn’t produce any insulin, which helps turn his food into energy, so he has to inject it instead. It also means his body can’t control his blood sugar level, which can be really dangerous if it drops too low.

He will start to tremble, shake and even fit. He can become confused as his body shuts down because he doesn’t have enough energy and if he doesn’t raise his blood sugar level quickly by eating or drinking something sugary he can lose consciousness.

This isn’t usually a problem during the day – he checks his blood regularly and can feel the symptoms coming on and react accordingly. The problem is at night when he’s asleep and not aware of how he’s feeling. We’ve had some pretty close calls over the years resulting in me having no option but to dial 999.

The harsh reality of being a parent with Type 1 diabetes is that it simply isn’t safe to leave the children with him overnight on their own – not for him and not for them.

If his blood sugar level were to drop too low during the night without me there to wake up and realise he could pass out and even die, leaving the children to fend for themselves.

So they went on a mini-break of their own to the in-laws. When I first bought our baby monitor it didn’t occur to me we’d be using it for more than just a baby…