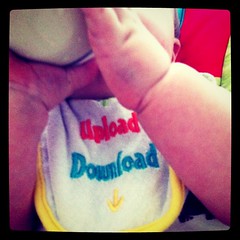 57.9 minutes. That’s the average amount of time it takes for images of more than two thirds of new-borns to appear on social media after their birth according to the print website Posterista. And, surprise surprise, Facebook is the most popular choice for that all-important photographic debut.

I don’t think we’d even managed to get hold of both sets of grandparents within 57.9 minutes of BB’s birth (after waiting for the phone to ring with baited breath for two weeks they’d given up and were gardening instead, phones buzzing on kitchen tables) let alone reach for the camera.

I suppose smartphones are at play here – it’s not as though new dads have a camera poised, take the first pic, kiss wifey goodbye and then leap into the car and race home to upload the precious picture to their PC and hit ‘post’ within an hour of the birth. A few clicks of the phone and it’s done, which begs the question: why the 57.8 minute delay?

I was at a wedding recently and at the end of the service the vicar was instructed to ask the guests not to upload any pictures of the ceremony to Facebook until the bride had the chance to upload hers first (you know who you are).

Such is modern family life.