Ever wondered where those little knitted hats on top of innocent smoothies actually come from? Or whether seven crushed strawberries and half a mashed banana really go into their strawberry and banana smoothie?

I don’t know about you but I’m inclined to be a tad skeptical about gimmicky claims from household names – those knitted hats are made by machines, aren’t they? And the seven crushed strawberries and half a banana line is just a marketing ploy, isn’t it? 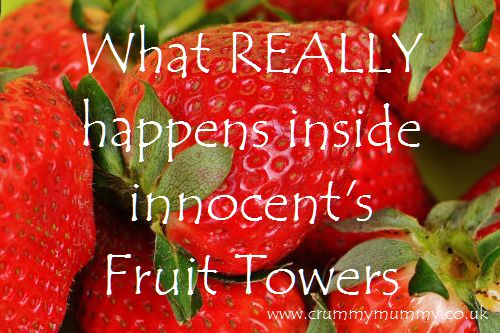 Regular readers will know we’re ambassadors for innocent’s latest campaign #sowandgrowUK, which is encouraging primary school children to be healthy by growing their own food from seed.

We were invited to their Fruit Towers headquarters to see what really happens behind the scenes, and given Fruit Towers is reputed to be one of the coolest offices in the UK and being a bit of a skeptic I couldn’t wait to have a nose around. Here’s what I found out.

1. There’s a banana phone. It’s what they used to answer calls from members of the public, but it now stands on a pedestal with its very own blue plaque. They still answer their calls with ‘hello, innocent banana phone’ though. 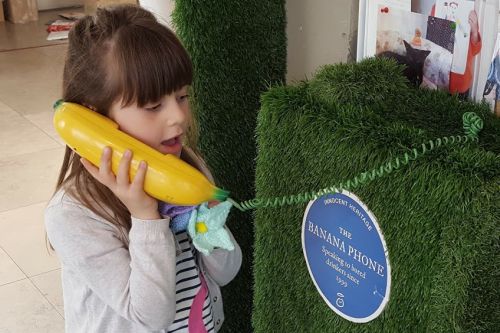 2. The entire offices are carpeted in astro turf. I was dying to take my shoes off and walk around in bare feet, but decided it probably wasn’t the done thing. 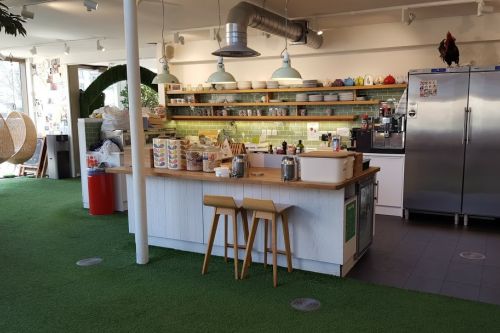 3. There’s a green light on the wall of each office and when it flashes they have to turn off the air conditioning and open the windows. Which you have to admit is pretty cool.

4. There’s also a James Bond-style lever on each floor which the last person to leave each night has to turn in order to switch off the electricity. I was dying to turn that too. 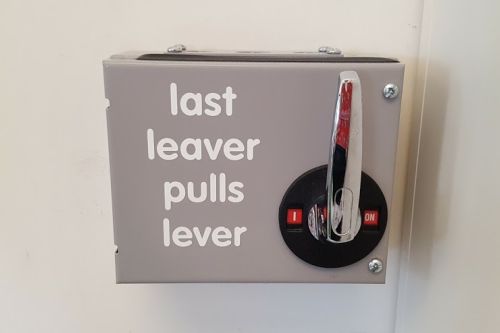 5. All the innocent drinks you see in the supermarket are born in the kitchen at Fruit Towers. And yes seven crushed strawberries and half a mashed banana really do go into the strawberry and banana smoothie – I asked someone in a white coat.

6. The staircase is lined with pictures and updates from the innocent foundation, whose mantra is ‘helping the world’s hungry’. I had no idea how much charity work innocent actually does, from grants to UK food poverty projects to working with Oxfam in South Sudan.

7. The hats for innocent’s #BigKnit project – where 25p from the sale of each bottle with a hat on goes to Age UK to help keep older people warm and well in winter – are actually made by real people. There’s a massive crate of them (hats, not knitters – I could have lost BB inside it) and pictures of ‘star knitters’ including a 90-year-old lady who single handedly made more than 1,000 hats! 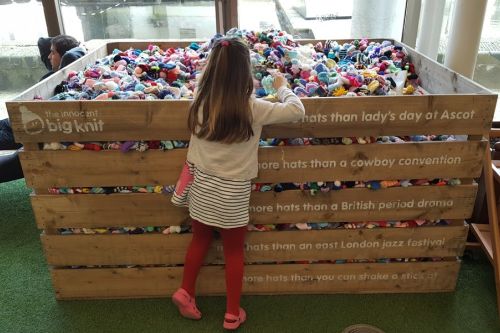 8. They’ve repackaged their 100% pure fruit kids’ smoothies into recyclable ‘wedges’ which you can keep out of the fridge for up to 12 hours (so perfect for lunchboxes). You can also win #sowandgrowUK seed packs by following the instructions on packs. 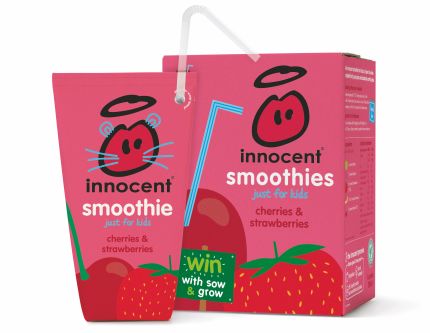 9. There’s a colour chart in the loo with which to match your wee. Shades include ‘A night out with Keith Richards’ and ‘Beetroot Surprise’. 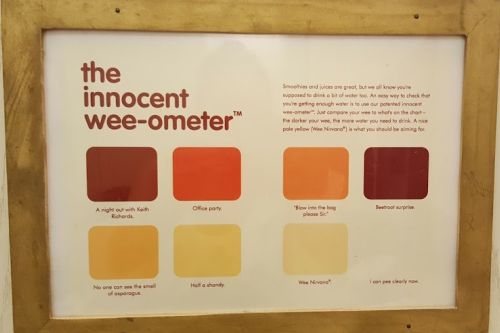 10. There’s a smoothie heaven. It’s where all the discontinued drinks go – they’ve got angel wings and everything. 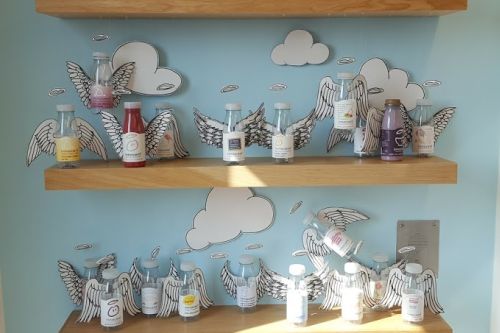 So while there’s definitely a lot of fun stuff about Fruit Towers – the banana phone, the astro turf, the wee chart – there’s also a serious message there too.

I was genuinely surprised by how much work they do to help others – above and beyond what might reasonably be expected from a business, which after all, is a business.

And what goes on there is a lot like the #sowandgrowUK campaign. While BB and Little B have been having great fun sowing and growing our own vegetables, deciding who gets the star grower badge each week and then eating what we’ve grown, the project also has a serious message.

It’s encouraging them to think about where their food comes from and understand healthy eating.

A survey by innocent found that growing at home or in the classroom are the top ways for children to learn about eating healthily, and the #sowandgrowUK project, in partnership with not-for-profit organization GIY (Grow It Yourself), is reaching 6,666 primary schools – that’s one quarter of the UK’s primary schools – in 2017. Which can only be a good thing, right?

Is your school signed up? If so then upload your photos at https://innocentsowandgrow.com/ to be in with the chance to win monthly prizes from innocent and see your classroom crowned as Sow & Grow champions! Following the repackage of innocent kids drinks, consumers can also win seed packs by following the instructions on pack. Available nationwide now in most major supermarkets. Good luck!

Have you ever wondered where the innocent knitted hats come from or whether seven crushed strawberries and half a mashed banana really make it into their smoothies? Have you ever knitted one of the big knit hats? I’d love to know!

We’re working with innocent as Sow & Grow ambassadors for the duration of the #sowandgrowUK project. As always all opinions are my own.