The REAL reason we’re so upset about #BrexPitt

I’m talking, of course, about the parting of ways of Hollywood A-listers Brad Pitt and Angelina Jolie after it was revealed that their 12-year relationship is officially over.

Unsurprisingly news of the demise of America’s golden couple took the internet by storm, with #Brangelina, #BrangelinaBreakup and #BrexPitt (my personal favourite) all trending on Twitter for longer than was really decent. 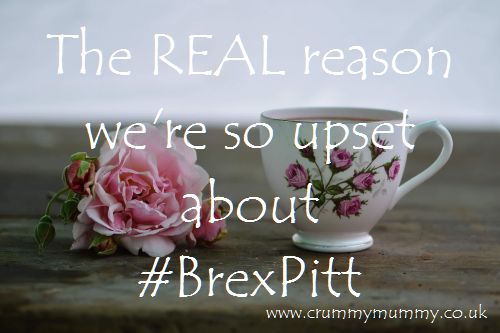 You’ve definitely heard Brad Pitt and Angelina Jolie are getting divorced, now the question is WHY?! 😩💔 Tap the link in our bio for all the theories insiders think are causing the split ⬆️ #bradpitt #angelinajolie #brangelina

But why are we so surprised by the unsurprising?

You could say the writing was on the wall from the off: she had two failed marriages and a litany of relationships under her belt; he was already married to another Hollywood celebrity. Anyone in their right mind would say it was never going to end well.

We were quick to forget about the slightly dubious circumstances surrounding the formation of their relationship, and it wasn’t long before they were the poster couple for everything a perfect relationship should be:

The point I’m making is that it seemed nothing could go wrong. What with their pots of money, houses on numerous continents and army of nannies, they had everything going for them. If they couldn’t make it work, what hope is there for the rest of us?

Of course all of the reasons cited above are probably the reason it didn’t work out. Who knows? Who cares? I hear you cry.

But the fact is we did care. Despite being a tabloid journalist and having written no end of articles about celebrity break-ups, I still felt sorry when I opened my homepage to be greeted with #BrexPitt.

And we thought they were it. But it turns out they weren’t. Which, as Bridget Jones would say, is a little bit sh*t.

Were you sorry to hear the news of Brangelina’s break up? Or couldn’t you care less? I’d love to know what you think!