Pregnancy no-nos & what to do if you break the ‘rules’

So, the little blue line appears on the testing stick and what you’d suspected ever since buying it is confirmed: you’re pregnant.

When I discovered I was expecting baby number three I had absolutely no idea I was pregnant – we weren’t ‘trying’ and as a result I hadn’t been watching what I was doing, eating or drinking. 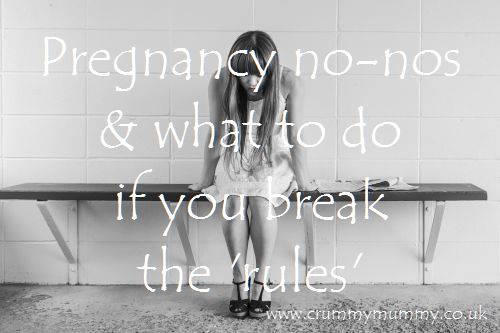 I unwittingly broke all of the biggest pregnancy no-nos in the weeks before I realised the reason I was feeling so awful wasn’t because I was simply more knackered than usual, but because I was, in fact, growing a tiny human being.

Pregnancy no-nos & what to do if you break the ‘rules’

Oh dear. Here I am gaily sipping a pint on a mini-break with Misery Guts, totally oblivious to what was going on inside.

Our last night #childfree & making it a good one @foxhillssurrey!

A photo posted by Natalie Brown (@confessionsofacrummymummy) on Jun 1, 2016 at 2:14pm PDT

Here I am getting extremely lightheaded in a boiling hot jacuzzi on the aforementioned mini break.

The obligatory #spabreak #selfie in the gorgeous #spagarden at @foxhillssurrey

A photo posted by Natalie Brown (@confessionsofacrummymummy) on Jun 1, 2016 at 5:20am PDT

Pregnancy no-no 3: ‘Don’t eat raw shellfish when pregnant as it can cause food poisoning’ – NHS Choices.

Which unfortunately would have ruled out this tray of sushi I ate on a work trip to London.

A photo posted by Natalie Brown (@confessionsofacrummymummy) on May 25, 2016 at 5:18am PDT

Other misdemeanours include changing the cat litter tray (apparently this puts pregnant women at risk of toxoplasmosis), exposing myself to toxic substances (I’m including toxic nappies in this) and eating mould-ripened cheese (it doesn’t do the French any harm, does it?)

So what should you do if you unwittingly break these so-called ‘rules’? My advice, having broken pretty much all of them, is not to worry about it.

There’s absolutely nothing you can do about it now, and given you can’t turn the clock back what’s the point in fretting? Just try to be ‘good’ from now on. When I was heavily pregnant with Little B I went for a pedicure so I was labour-room-ready (it seemed important at the time!!) and there was a retired midwife having her nails done, who told me sagely: “remember they survive in spite of us”. Wise words indeed.

Did you stick to all the ‘rules’ in pregnancy? Or did you break the pregnancy no-nos too?