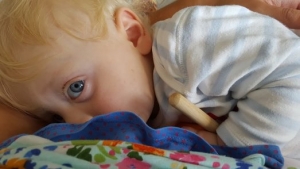 Our week has been summed up by this stick in Little B’s hands. It’s part of a wooden musical instrument kit and he’s obsessed with it. It’s been surgically attached to his hand and he’s been sticking it in things – the little cup you put washing liquid in, the wheels of the pushchair, my mouth: as long as it’s not a toy he’ll play with it.

I’ve given up trying to prise it out of his fist, and as you can see it’s even been with us for feeds.

I also love how this photo shows that, despite the fact Misery Guts and I both have brown eyes, his are the colour of the sky.