Misery Guts should star in his own version of Les Miserables 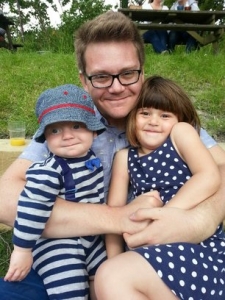 Some of our friends were surprised with the pseudonym when I first started blogging, but here’s the thing: miserable people often appear easy-going, light-hearted types on the outside (pictured), but close the front door and that’s when their true colours really come through.

Here are some recent examples of why Misery Guts is miserable:

1. I asked him what he’d like for Father’s Day and he said amnesia. He wasn’t joking.

2. A bad parsnip made it into a casserole I cooked and he spent the entire evening ranting about how supermarkets palm their rotten veg off on internet shoppers. He spent a good 10 minutes taking a series of photos as evidence, but then ran out of hot air and did absolutely nothing about it.

3. It was also the supermarket’s fault when he opened a box of rice krispies with too much force and the bag split in two, sending puffed rice cascading down all over the kitchen floor. Apparently they make the bags thin on purpose.

4. It was all the ‘effing’ cat’s fault when a pint of beer he’d balanced on the arm of the sofa fell down his back and seeped into the button backed fabric.

5. He doesn’t like visiting anywhere of interest on high days and holidays because of all ‘the people’.

So now you can see what I have to live with. And why I like wine so much. Misery Guts should star in his own version of Les Miserables…