That’s the question I was asked when I appeared in the latest phase of antibacterial brand Dettol’s Protect Like A Mother advertising campaign, a video in collaboration with Mumsnet. 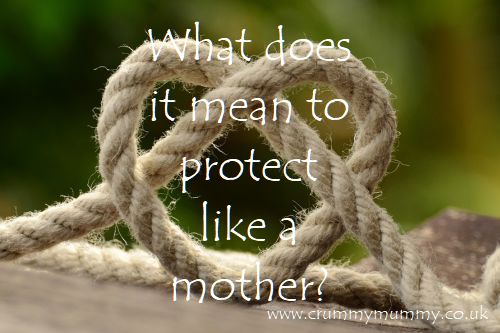 Littlest B and I went to Mumsnet Towers in London where we met up with fellow bloggers Surrey Mama and Georgina Clarke to talk in front of the camera about what motherhood means to us and how we’ve become protective since becoming mums.

And it’s a jolly good question. What does it mean to protect like a mother?

I bet if you asked 10 mums you’d get 10 different answers, so I asked some blogging buddies and here’s what they said.

“To protect like a mother means to become a lion or lioness. I would do anything for my baby and would throw myself under a bus if it meant saving her,” says Katy at Katy Kicker

“An irrational desire to ‘accidentally’ push over the bully in the soft play!” says Alex at
Better Together Home

“To be their advocate and biggest fan,” says Becci at To Aufinity and Beyond

“That feeling you get inside when someone upsets them. The pure, lioness rage, but then having the ability to just listen and offer calm advice as you know that will help them more than racing off to roar at the person that upset them,” says Louise at Pink Pear Bear

“When a child bit my daughter really hard just under her eye at soft play when she was only four months old, the rest of the room became a blur and all I could do was make sure my daughter was okay, it’s the Mama Bear instinct!” says Hanna at Little Snippets

“To have eyes at the back of your head,” says Nicole at Tales From Mamaville

“It means never giving up – even though my husband left me, our three-year-old and our three-week-old for another woman I won’t give up,” says Suzanne at And Another Ten Things (Oh Suzanne! I just want to give you a hug!)

“A ferocious fight or flight trigger to keep your children safe no matter what,” says Nyomi at Nomipalony

If you’d like to know what I think it means to protect like a mother here’s Mumsnet and Dettol’s video which you’ll find over on Mumsnet’s YouTube channel now (that’s me in the middle!) I’d love to know what you think!

What does it mean to you to protect like a mother (or father)? I’d love to hear your thoughts!