Does being married make you a better parent?

Does being married make you a better parent? If the latest government report is to be believed it does. According to a study for the Department of Work and Pensions married parents are more likely to raise a ‘successful family’, and children brought up by lone or unmarried parents do worse.

As a (happily) married mum of two I was aghast when I read the story, so I can only imagine how single and unmarried parents must be feeling. What a slap in the face for all the hours you’ve worked, the clubs and activities you’ve saved up for, the treats you’ve gone without and sacrifices you’ve made in order to give your children the best start you possibly can. 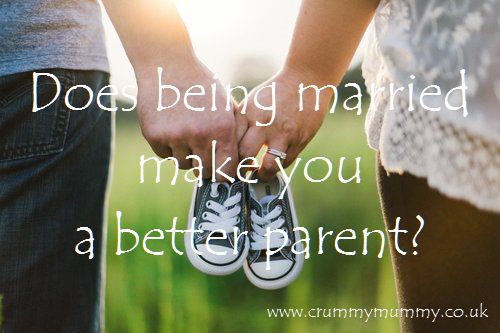 Of course the suggestion that married couples make better parents is nothing new, but what annoys me about ‘reports’ like this is the sweeping generalisations they make. When you delve into the detail it turns out the researchers looked at just 40,000 families – that’s 40,000 out of the UK’s 18.7 million families. So 0.2%.

Misery Guts says the results will be ‘weighted’ to make them representative of the population as a whole, but to me this smacks of the study that decided nurseries can afford to increase funded childcare for three and four year olds from 15 hours a week to 30 with no extra funding from central government after looking at nurseries mainly located in the north of England, where the cost of living is less than the south.

They don’t say whether the families in this latest study were spread evenly throughout the UK and from a variety of socioeconomic backgrounds, or whether they were from one specific location and therefore even less representative of the nation as a whole. Either way I sincerely hope they’re not going to start drafting policy based on these findings.

But quite apart from all that, what’s a ‘successful family’ when it’s at home? It depends on your definition of success. If BB and Little B reach adulthood with us all still on speaking terms and without any of us having killed each other or run away, I’ll consider that a success.

In my experience it’s often the seemingly ‘successful’ families who are actually the most dysfunctional ones, and surely it’s better to have two happy, single or unmarried, parents than two unhappy, married, ones.

Barak Obama, Madonna, Bradley Wiggins, John Lennon, JK Rowling, Angelina Jolie – they were all raised by single parents and many of them have argued that being from a single parent family actually made them more driven.

Anyway, rant over. I better get back to being a ‘successful parent’. Which at this precise moment in time means extracting Little B’s hand from the cat litter tray and stopping BB helping herself to chocolate biscuits.