To the man who refused to give me his seat

They say chivalry is dead, and it turns out it is.

Regular readers will know our school run is a bit of a mission: it’s four miles each way and is only partially on a bus route, with the non-bus route bit up a hill with a buggy (one of the reasons I hate the school run). 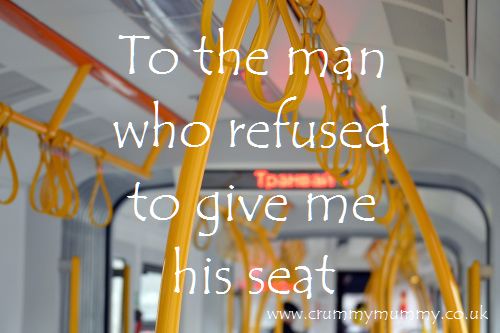 At almost eight months pregnant it’s fair to say it’s not getting any easier. So when I’ve finally made it up the hill, collected BB and walked back down again to the bus stop, I’m desperate to sit down.

Except on two separate occasions this week our bus has been full, and we’ve had to stand. Not once did anyone offer me their seat.

Of course the passengers, many of whom are elderly and probably need a sit down themselves, don’t know I’ve just walked four miles pushing a heavy buggy up and then down a hill, and I appreciate that sometimes, what with big winter coat, I might not even look visibly pregnant.

But on one journey this week there was a man – roughly around the same age as me – sat right next to the buggy area in the priority seating who looked me up and down as I stood balanced precariously with the pushchair and BB and book bag and PE kit, took in my bump, then turned and looked straight out of the window.

It was the way he did it that annoyed me.

He had no visible sign of disability and I know he didn’t need that seat because he later got off the bus while we were still on it, and I sank gratefully into the space he’d vacated.

Here’s what I should have said.

To the man who refused to give me his seat

I know, being a man, you can’t know what it feels like to be heavily pregnant. Let me try and enlighten you.

This might look like ‘just’ a bump to you, but there’s a little human being inside. They move around – a lot – sometimes in a nice way, and sometimes in a not-so-nice way.

Sometimes they kick you in the bladder, or lodge a limb under a rib, or jump around so much you can feel them tugging on the cord attaching them to the placenta.

All this is much easier to bear when you’re sat down, not balancing in a moving vehicle while trying to keep a pushchair steady and a five-year-old from falling over.

As well as a baby inside the bump there’s also lots of fluid, and a placenta which weighs almost as much as the baby itself.

Imagine tying a 20lb weight around your waist and going about your daily life as normal – you will tire more easily and eventually you’ll need to sit down. Especially by late afternoon when you’ve been on the go all day.

You probably won’t be sleeping that well, and if you’ve got other children with you the chances are you don’t get much chance to sit down.

So next time you see a pregnant lady standing in front of you on the bus, offer her your seat. Don’t turn the other way.

The pregnant lady on the bus who will always think of you as a total b**tard.

What would you have done in my situation? Have you ever had to ask for a seat when pregnant? Do you think chivalry is dead?