If mums went on strike… 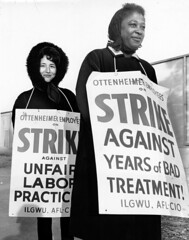 Our binmen have gone on strike. It’s only day two and the wheelie bins are already overflowing, and it’s only a matter of time before detritus starts spilling out too.

I suppose the binmen (sorry, waste management and disposal technicians – I know, me too), who are facing a pay cut, have no choice but to down tools; theirs is the sort of job that no-one notices gets done until it doesn’t. Like coastguards who drive up and down seafronts every morning checking the life rings haven’t been carted off by someone who’s had one too many.

Or mums who wipe drips of food from the kickboards under the kitchen cupboards and clean out the toilet brush holder. I shudder to think what would happen if mums downed tools. I mean really downed tools – no washing, no cooking, no ironing, no shopping, no school run, nothing: it might take a week or two, but the country would probably come to a complete standstill.

Equalities minister Maria Miller should think on. In a report on ‘equalising the labour market participation rates of men and women’ she last week claimed more women in the workplace could increase GDP per capita growth by 0.5 percentage points per year – a potential yield of 10% of the GDP by 2030.

Really? But what of those women’s current day jobs as mums? There’d be less councils earning fees for car parking in town, less soft plays collecting £4 a pop for sessions on a rainy Tuesday afternoon and less local businesses selling lattes and brownies to baby and toddler groups across the country. Where will GDP be then?

Perhaps we should take a leaf out of the binmen’s book and go on strike to prove it.