I’m referring, of course, to THAT Baby Dove advert.

In case you’ve been on another planet the boffs behind Unilever’s Baby Dove have taken it upon themselves to make breastfeeding the focus of the brand’s latest marketing campaign, alienating and outraging parents like me up and down the country in the process. 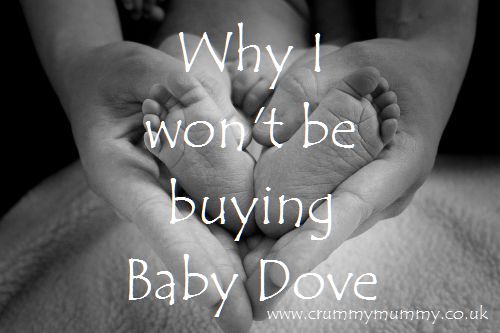 With the strapline ‘what’s your way?’ ads feature a picture of a crying baby alongside statistics featuring the percentage of the population for and against breastfeeding in public.

One such ad reads: ‘So whether you’re among the 66% who think that breastfeeding in public is fine, or the 34% who think otherwise, whatever choice you make, we are with you every step of the way’.

One of the golden rules of blogging is not to burn any bridges because you don’t know what opportunities might arise with a particular PR or brand in the future, but in this case I don’t care. This needs saying.

Firstly, what on earth has breastfeeding got to do with baby soap? Absolutely nothing, that’s what.

Thirdly, what are Baby Dove hoping to achieve by highlighting such divisive statistics? Whoever came up with this campaign has clearly never had to deal with a crying baby in a supermarket, or been out longer than they intended to be and been forced to feed somewhere they’d really rather not.

When I appeared on ITV’s This Morning earlier this year to talk about why I’m proud to breastfeed in the pub I said that questioning whether it’s ok to feed a baby in public serves only to reinforce the idea that breastfeeding is a problem, and feeding in public is something you do only if you dare.

How is drawing attention to the percentage of the population who don’t approve of feeding in public helpful to a mum?

This does not make me want to buy Baby Dove. This makes me want to steer well clear.

Of course they say there’s no such thing as bad publicity, and I have no doubt this story has resulted in clicks and shares for Baby Dove. But will those clicks and shares translate into sales? I sincerely hope not.

As a freelance feature writer I deal with Unilever brands including Dove on an almost a weekly basis. I’ve written about fantastic ad campaigns from Marmite’s ‘Love it or hate it’ drive to the PG Tips monkey and I can’t fathom how they’ve got it so spectacularly wrong this time. And with a brand supposedly famed for championing ‘real women everywhere’.

Presumably people sat in a room and agreed this was a good idea. And presumably this good idea was then signed off by the powers that be.

Sadly I suspect this is one of those stories that won’t be given the attention it deserves by certain parenting platforms – the very platforms designed to represent and give a voice to parents – because brands like Baby Dove are too valuable a source of advertising revenue.

With a bit of luck it will be picked up by the likes of Mail Online though. Because if this isn’t one worthy of their side bar of shame then I don’t know what is.

That, people, is my way, and why I won’t be buying Baby Dove.