How to cope with a grumpy man 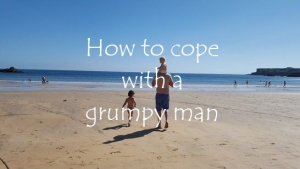 Patience Deficit Disorder. That’s what Misery Guts claims to suffer from – totally made up of course. I know I’ve written about how miserable he is before, but I really don’t think the true extent of his grumpiness comes across on the blog. You probably wouldn’t believe me if I told you.

I say this after new research by Merlin Annual Pass has revealed the top 50 things that make dads grumpy, as well as the things that cheer them up.

The thing is, the things that supposedly cheer them up are likely to make Misery Guts even worse. For example:

1. Sixty-two per cent of grumpy dads are at their worst during the week, coming out of their mood for the weekend.

It’s the opposite in our house – a combination of both kids running riot, chores to do and a myriad of tasks to cram in is guaranteed to rub Misery Guts up the wrong way. I swear he actually looks forward to going back to work. To be honest, I don’t blame him.

2. A family day out will improve their mood.

Going somewhere involving other people and spending money will bring out the worst in Misery Guts. In fact, it is to be avoided at all cost.

3. Holidays are the best time for most grumpy dads.

I’d say a week into our annual two-week holiday is when Misery Guts is at his peak of grumpiness.

Over the years I’ve come up with a tried and tested strategy for dealing with Patience Deficit Disorder, otherwise known as how to cope with a grumpy man:

1. Put your tongue in your chin like you did at school and pull a face when they’re not looking. This is highly cathartic, especially when they’re mid-rant, as is silently mimicking them.

2. Ignore him. A bit like a toddler having a tantrum, just walk away.

3. Micro-manage situations in which you know they’re likely to blow their top. Again, a bit like dealing with a small child, choose the best time to impart bad news. Like the fact there’s no money left in the joint account and it’s only half way through the month while handing them a cold beer.

4. The silent treatment. This is when you behave like the teenager, and say as little as possible until they realise they’re being a t**t, apologise and harmony is restored. For a little while.

5. Laugh. Make light of a situation by trying to see the funny side – either turn the situation into a joke or turn their response to it into a joke. Because if you don’t laugh you’d cry.

It seems Misery Guts isn’t the only one anyway – apparently a quarter of British dads admit they’re always cranky.

The trouble is the research has also revealed dads are at their grumpiest aged 39 – which means there’s still two years to go for us. Yikes.

Are you one of the 25% of women living with a permanently cranky man? I’d love to hear from you!