Are you guilty of competitive tiredness? 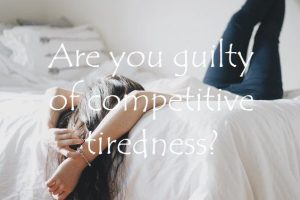 I haven’t had a decent night’s sleep in almost a year and a half. At 16 months old Little B still wakes up three to four times a night – roughly every two hours – for a feed, and to make matters worse he often won’t settle back down in his cot so ends up in our bed.

This results in Misery Guts occupying one side of the bed, Little B in the middle with his arms splayed out and me forced into a position in no way conducive to restful sleep on the sliver of bed that’s left.

I can count on one hand the number of times I’ve had a proper night’s sleep since he was born – I can even tell you the dates because they’re the times – when almost at the end of my rope – we’ve left him with grandparents and fled as fast as we possibly can to the nearest hotel.

Of course Misery Guts is tired too. He often gets up at 5am and works from home to catch up on his workload before going into the office, he’s training for a marathon and with two kids under five there’s no down time at the weekends to recover from the working week like there used to be.

In fact, I’d go as far as to say it’s impossible not to play the game of competitive tiredness when your other half, who you know slept well and soundly because you were right next to them feeding the baby in the small hours, wakes up in the morning and declares they’re ‘sooo tired’ because they had a ‘bad’ night’s sleep.

Just like it’s impossible not to wade in with your own levels of exhaustion when one of your mum and baby group shares with everyone what an awful few days it’s been, and how they’ve never been more tired. Within minutes it’s become a competition.

And when I’m reading a blog post centred around lack of sleep I find it impossible not to comment with details of my latest Lost Sleep of Motherhood woe.

Even BB, aged four, plays the game. The other day I asked her to help me tidy up the toys before tea time and she told me she couldn’t because she was too tired from watching CBeebies. A few minutes later I suddenly realised we’d become embroiled in a conversation about why she was more tired than I was.

You’d think you’d be too tired to argue about how tired you all are and go into all the ins and outs of why you’re so shattered, but the fact is I can’t resist talking about it. It’s like a red rag to a bull.

Am I alone in banging on about it, both in imaginary conversations in my head and out loud? Or is competitive tiredness something that can be avoided after all?