I’m referring, of course, to the practise of dressing siblings of different ages in matching outfits. 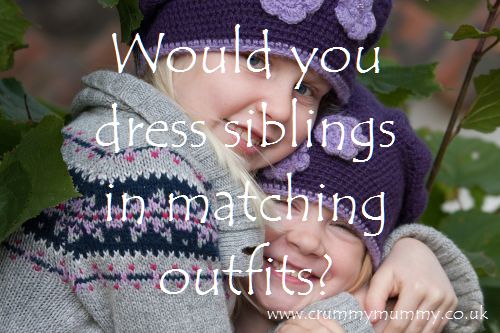 Before Littlest B was born in February I always turned my nose up at the idea – why on earth would you dress two children of different ages in the same thing? – but then I found myself with two girls and this happened. 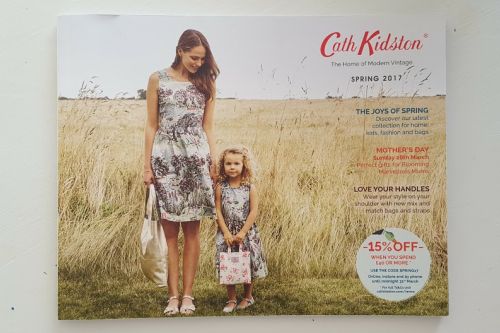 The latest Cath Kidston brochure plopped onto my doormat and before I knew what I was doing I’d ordered the most adorable matching dresses for Littlest B (two months) and BB (five and a half).

Of course Misery Guts hates the idea, but then he would, so I decided to canvass some fellow bloggers for their opinion.

It turns out there are two very different camps.

“I do it and most of the time it’s because the boys all want to dress the same. They are all really close! It is also helpful if you are planning on going out (like to a theme park). If your child was to go missing then you can describe exactly what it is they are wearing.” Jaymee at The Mum Diaries

“I’ve started doing it in the hope that it will help my boys bond. There’s only 14 months between them and I really want them to be close. In the January sales I bought matching clothes for them for next Christmas!” Hollie at Thrifty Mum 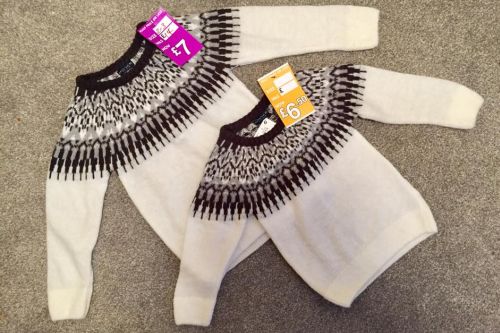 “My girls are always matching! I do it whilst I can because I think it’s beyond cute the way my toddler gets excited. My baby couldn’t care less what she wears and my eldest isn’t fussed either but she loves to ‘match’ her wee sister. If I’m out shopping I know to just buy double, which is great and many shops like Jojo Maman Bebe do ‘£5 off’ multi buy deals.” Heather at The Imperfectly Perfect Parent

“I have a one year old and a three-week-old and I have several matching outfits already! I think it’s cute while they’re little.” Sam at My Mini Monkeys

“I do it! Mine are two years apart and as soon as I realised I had two boys I knew I would. They love it though and ask to look the same, so I’m exploiting that until they decide they don’t like it any more!” Laura at Life With Baby Kicks

“I’ll be honest I always hated it!! But then I had two girls and I’ve done it. Guilty.” Sarah at Run Jump Scrap 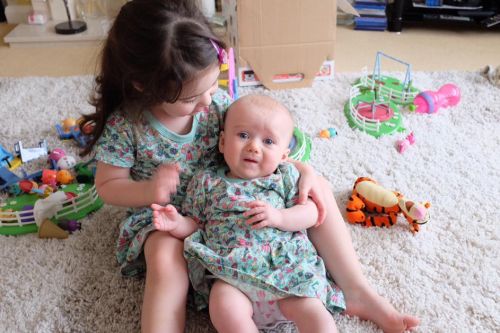 “I only have the one daughter but have one on the way and I won’t be dressing them alike. My mother did it with my sister and I and it was mortifying as we were four years apart” – Jenna at Then There Were Three

“It might look nice on Instagram but it’s not really fair. My sister and I were less than a year apart and we always dressed as twins – what’s worse is she would get up first in the morning and I would have to wear whatever she picked out. I grew up feeling like her side kick!” Emily at A Slummy Mummy

“I remember the comments we’d get as children when my mum put us in matching jumpers. We’re four years apart each (so eight between me and my sister) and it was awful!! I remember we all had jumpers with ‘Next’ written on the front and people would find it hilarious to say ‘next, next, next’. It still makes me shudder!” Hayley at Devon Mama

“My mum dressed my sister and I the same sometimes, and when I say the same I mean the EXACT same. There’s a four-year age gap, and maybe 80s fashion didn’t help but we looked ridiculous.” Lynette at New Mummy Blog

“NO! For some reason it enormously irritates me. Kids need to show personality & individuality.” Emma at Life in the Mum’s Lane

“I only have one child at the moment but matching clothes on other siblings makes me cringe. I can’t quite put my finger on it but it feels a bit odd. I don’t even like twins in the same clothes! Let them be individuals!” Emma at Emma Reed

What do you think? Do you have same-sex children and do you dress them in matching outfits? Or do you think twinning is a big no-no? I’d love to hear your point of view!