There are just weeks left until the end of the school year when school and nursery break up for six long weeks. While the teachers of the land are no doubt rejoicing I’m willing to bet the working parents of the land – like me – aren’t.

Schools and nurseries and after school clubs might shut down for the summer but it’s business as usual for the rest of us, except you’ve got little people who need looking after and entertaining too. 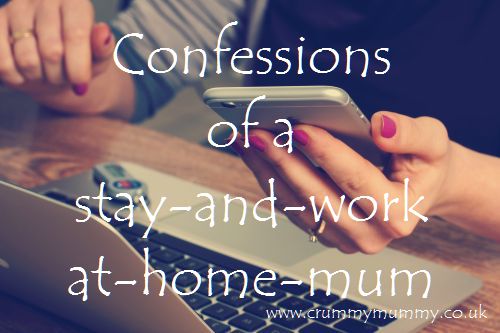 This will be the first time I have a summer school holiday to get through and I have to say I’m dreading it – the two weeks over Easter were bad enough due to all the things they fail to tell you about school holidays. I’ve written before about how to stay sane when working from home with kids, so for anyone wondering how on earth they’re going to cope over the summer I thought I’d share some tips on how I get through the working day in the school holidays:

1. The TV is your friend. Forget whatever you were told when you were a child, they’re not going to get square eyes, and frankly there are worse things they could be doing than staring at an oblong screen. My two even know which button to press when the notification that the TV will automatically switch off in three minutes because it’s been on so long pops up.

2. Feed them raisins, smarties, jelly tots or anything small. If I have a really important phone call to make or an email to write, I sit them down with the tiniest snack possible which will take them the longest possible time to eat. A tube of smarties will easily buy you 10 minutes of peace.

3. Don’t clean up after breakfast. What’s the point of wiping down the high chair, cleaning up the mat underneath and putting everything away when you’re going to be getting it all out again in a few hours? Sitting on some masticated Shreddies isn’t going to do the baby any harm, and it will have dried out by lunchtime anyway.

4. Let them make their own food. This may sound like false economy owing to the mess you’ll be clearing up later, but it’ll buy you the time you need in the short term and you’ll be surprised how long it takes them to carry out the simplest task. Letting BB spread butter on toast or make crisp sandwiches (you can’t beat a crisp sandwich!) generally frees up a good 20 minutes. Admittedly the butter looks like it’s been attacked with a machete (pictured), but think of the 20 minutes! 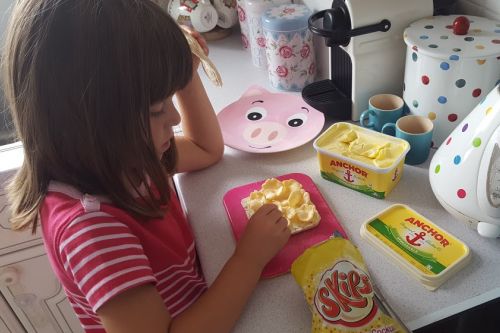 5. Bribe them. It doesn’t really matter what with – ice cream, chocolate, a trip to the park, all three – the promise of a treat later on if they’re good is essential.

Are you dreading the school holidays, or don’t they affect you? I’d love to hear your tips for coping!

This post is an entry for BritMums’ Confessions of a Summer Parent Challenge, sponsored by Anchor.