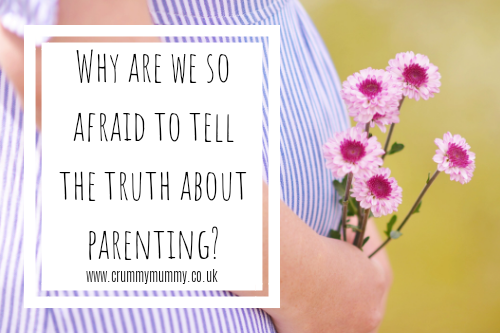 He went on to brand parenting ‘exhausting’, ‘banal’ and ‘like looking after a dog you can’t house train’ in a series of tweets (to be fair, he does have a point).

Unsurprisingly the world and his wife promptly waded in, including me when I was asked for my reaction on Vanessa Feltz’s BBC Radio London breakfast show (if you want to know what I said you can listen here). All of which begs the question: why are we so afraid to tell the truth about parenting?

When I first started blogging in 2013 it was because I felt like I had something to say and nobody to say it to – by which I mean the truth.

Because no-one does tell you. You’re left to find out on your own. I’ve had so many messages from mums – and dads – over the years thanking me for saying it how it is, and I always think if I can help just one person then it’s worth it.

Not long after I published a post on the truth about breastfeeding at one I had a message from quite a well-known Radio 1 DJ telling me I was the reason she didn’t give up breastfeeding, and she was still feeding her son.

My blog has also been a platform for other people to say it how it is, including new mum Katie Pike who revealed in a searingly honest guest post about her battle with post natal depression that she still didn’t love her daughter. In the six years I’ve been blogging that’s the post with the biggest number of hits, likes and shares.

So, I don’t see why saying it how it is is such a bad thing if it helps someone else. In the insta-perfect world we live in I think a bit of perspective is needed, and the fact is Duncan Jones is right: parenting is exhausting and banal a lot of the time.

What do you think? Have you heard about Duncan Jones’s Twitter rant? Do you agree with his comments, or do you think he should have kept his thoughts to himself? I’d love to hear your point of view!

Things they don’t tell you about being outnumbered