5 tips for breast feeding in public 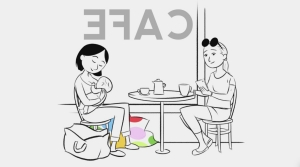 Have you seen the latest ads the UK government is running to encourage more women to breast feed in public? An animated advert shows a new mum joining another woman at a table in a cafe before swathing herself and her baby in a bright yellow nursing scarf the size of a curtain, prompting the other woman to put on a pair of sunglasses.

What they’re getting at is that it’s ok to just whip them out in public and there’s no need to cover up.

I’ve never bothered with a tailor made nursing cover when breast feeding in public, mainly because having given birth and had all manner of strangers (ok, medical professionals) peer, poke and man-handle my foo foo I couldn’t give a monkeys if someone happens to glimpse a bit of areola in a coffee shop. If it puts them off their latte then, well, tough tits.

But I totally understand why those who do give a monkeys feel awkward and intimidated at the prospect, so I’m all for a bit of public service encouragement.

Having breastfed two babies in public over the course of three years now (in hair & make up at This Morning next to Sir Terry Wogan was a high point, at a bus stop in the pouring rain is probably the lowest point) I thought now would be a good time to share 5 tips for breast feeding in public:

1. Your favourite underwired bra might be the best one to go with the pre-baby top you really want to wear again but think about the logistics of wrestling a boob out of it and into the baby’s mouth in public. You don’t have to forgo the pre-baby top, just wear a drop-down nursing bra with a drop-down nursing vest under it for easy access (I love Jo Jo Maman Bebe for vests).

2. Look for a chair with a back and arms in the corner or side of the room so you don’t have people all around you and you can sit back and rest your arm comfortably while feeding. Sitting on a stool in the middle of a café doesn’t make for a comfy feed.

3. If you’re in a coffee shop sit as far away from the clatter of the counter and noise of the coffee machine as possible. There’s nothing like hissing steam, the clinking of glass and clanking of plates to interrupt a baby feeding.

4. Take your breast pad out and put it somewhere safe. After shoving it further down my bra and either having it fall out later or realising that I’ve been walking round with an unsightly lump in my cleavage, I now tuck it under the leg of the side I’m feeding on and put it back in afterwards.

5. Know what you’re going to say if someone challenges you. It’s actually against the law for someone to ask you to stop breast feeding in a public place or to go somewhere else to do it. I’ve never been asked to move or stop feeding in public (in fact I often get encouraging smiles and nice comments) but I’ve always got a response planned in my head just in case as there’s nothing worse than knowing you’re in the right and wishing afterwards you’d said this or that. My response would be that if you can eat and drink here, then so can my baby. It’s also worth googling what to say – there are some hilarious suggestions.

How do you feel about breast feeding in public? Is it just like feeding at home or a big no-no?

Public Health England has put together lots of helpful hints & tips on breastfeeding on their Start4Life website, and there’s also a Facebook page featuring videos and breast feeding stories from real mums. It’s worth a look!