The Duke and Duchess of Cambridge celebrated their fifth wedding anniversary at the weekend. The papers have been full of coverage, and I was heartened to notice that despite having only been married for five years, and in spite of leading charmed lives owing to being royal, they look like they’ve aged 10.

It’s the kids that have done it. Misery Guts and I have also been married for five years, and we also look like we’ve aged 10. At least.

This got me thinking that there are things no-one tells you about marriage, and things you only know after you’ve been married or living together for a certain amount of time. 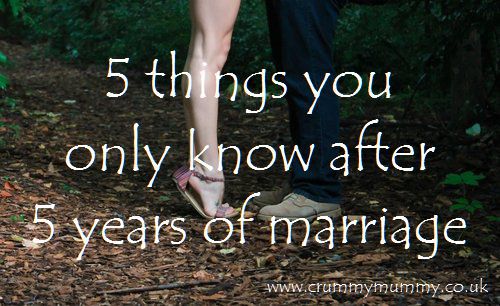 So I’ve compiled a little list of 5 things you only know after 5 years of marriage:

1. Nothing is sacred or mysterious. Having a wee while the other one is in the bath becomes so common place you no longer even notice. It’s when the wee becomes a number two you should start to worry.

2. If you’ve had kids the chances are you’ve seen things, horrifying things, they don’t show you in films. In some cases these things are so horrifying you haven’t actually vocalised them yet. Not to each other, anyway.

3. If one of you has been seriously ill, and by this I mean hospital ill, the chances are you’ve done things you never dreamed of. Or at least things you thought you wouldn’t do until you were in your dotage and therefore too old or senile to care. Remember, you did say ‘in sickness and in health’.

4. When you first met, your other half looked and acted nothing like your prospective in-laws. In fact you were hard pushed to see a resemblance. Five years down the line you’re both slowly but surely turning into your parents. Sometimes this resemblance is uncanny.

5. You often find yourself thinking, or saying, ‘it’s a good job it’s not our first date’. You’ve also realised that ‘until death us do part’ is actually a rather long time.

Have you been married or with a partner for five years or more? How has it been for you?