5 reasons I hate half term 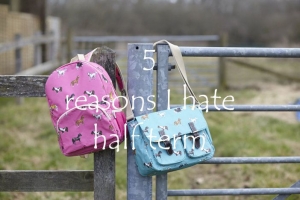 It’s official: just like the school run, I’ve discovered I hate half term. They call it the ‘half term holiday’, but it’s not a holiday. Not my kind of holiday, anyway. There’s more toys to tidy up, more meals to produce, more washing to be done and more activities to organise.

This week has only been our second experience of half term since BB started school, and we (stupidly) decided to take the week off work since both the kids were off. Which was a decision I regretted by Tuesday.

Here are 5 reasons I hate half term:

1. You shell out money hand over fist. I know I can often be heard bemoaning the cost of childcare, but we seem to have spent the equivalent of Little B’s weekly nursery fees over the course of the week. And we don’t have much to show for it, except a four-year-old who says she’d rather be at school and a depleted bank balance.

2. Washing. Both kids have worn a new set of clothes every day, and I’ve lost count of the number of loads of washing I’ve done. And the dratted basket is still bursting. There’s a lot to be said for school uniform, namely one set of clothes that’s worn all week with only the changing of socks and pants and the odd shirt (admittedly I do spend a lot of time sponging on week nights, another sign I’m turning into my mother).

3. Lunchtime and associated preparation, cleaning & wiping. I’d leave nurseries and schools to deal with this meal of the day 365 days of the year if I could. God I hate wiping.

4. It’s turned us into That Family. That Family who cause a commotion on immediate arrival somewhere (in this case a packed train carriage – ‘Mummy I need a POO. I can feel it trying to get out’ but two seconds later ‘don’t worry, it’s gone back in again’), continues to breach the peace the entire time they’re there and as soon as they’ve left peace is instantaneously restored. And I swore it wouldn’t happen to me.

Frankly, I can’t wait until Monday when normal service will resume. I’m going to do my best to avoid taking a ‘holiday’ during half term again – instead I could take my week off during term time when the others are at school, nursery and work.

Now that would be more like a holiday… How about you? Do you love or hate half term?