‘Don’t get them wet or feed them after midnight’.

Those are just some of the words of wisdom I’ve been given as we prepare to enter the dreaded threenage years – and it’s fair to say I’m quaking in my boots. 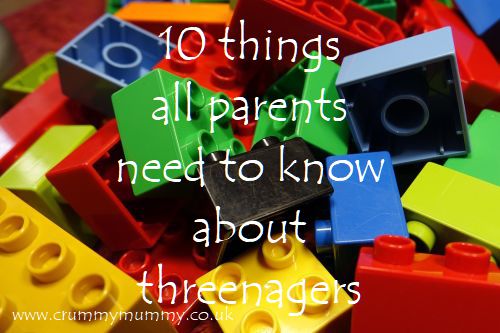 Little B is about to turn three (it’s been three whole years since we did it after multiple miscarriage) and having only just survived the weanage years and terrible twos thanks to the vats of wine I’ve had on hand to help me I’m not looking forward to the threenager milestone.

I don’t remember experiencing either the terrible twos or the threenage years with BB, but then she didn’t have two siblings to compete for attention with and was the centre of everything. There was nothing for her to be outraged or indignant or difficult about.

Little B on the other hand, is a different story. With not only a big sister but now a little sister to contend with he hasn’t been the centre of everything and there’s plenty for him to be outraged and indignant and difficult about.

So how do I cope? I asked some fellow mums and dads who have been there, done it and got the ‘I survived the threenage years’ t-shirt and here’s what they said.

1. “Never show weakness of any kind. If you do they will own you in an instant. Also, don’t get them wet or feed them after midnight,” says Natasha at Mummy and Moose

2. “If you thought the twos were terrible, brace yourself! The threes are as bad if not worse as they’re learning to answer back,” says Kelly at School Runs and Shopping Trolleys

3. “Picture a typical teenager. Moody, defiant, challenging. That’s EXACTLY what your threenager will become, coupled with the fact that he is unable to reason logically with you. So if he wants his sandwiches in triangles and you have cut them into squares, god help you,” says Nicole at Tales From Mamaville

4. “Stay as calm as you can on the outside and pick which behaviour you need to address and which you don’t. Then lock yourself in the bathroom and scream!” says Suzy at We Made A Wish

5. “Give them as much choice as you can, from choosing meals to which clothes to wear. That way they can feel responsible for choices affecting them and have some control over their lives. It has really helped save my sanity!” Jenny at Monkey and Mouse

6. “Prepare yourself for the ‘why’ stage. You don’t think it could ever be that bad but my god after a whole day of ‘why this’, ‘why that’, you will need a drink!” says Emma at Emma Reed

7. “I’m not sure how I got through it. The kids seemed to cry less than us!” says Pete at Household Money Saving

8. “Gone are the simple ‘ok’s’, gone are the half ass simple answers and gone is the simple acceptance that mammy is always right – it was nice while it lasted!” says Geraldine at Geraldine Renton

9. “Be firm and stick to your guns. They own you if they see any weaknesses. My daughter demands chocolate cake for breakfast every day now – it happened once and she hasn’t forgotten!” says Samantha at Stressy Mama

10. “I’ve actually found it easier since my eldest turned three. He can understand exactly what I’m saying and can explain things properly, so there aren’t really any tantrums due to frustration. He can also help me with a lot more now as well, like getting his shoes and coat on, so the day to day things are easier,” says Emma at Our Fairytale Adventure

If Emma’s right there is at least light at the end of the tunnel! Have you had to cope with a threenager recently? Do you have any top tips for survival?