Seven weeks. That’s how long it’s been since baby number four Violet Hope graced us with her presence.

And it’s fair to say life has got rather interesting during that time! 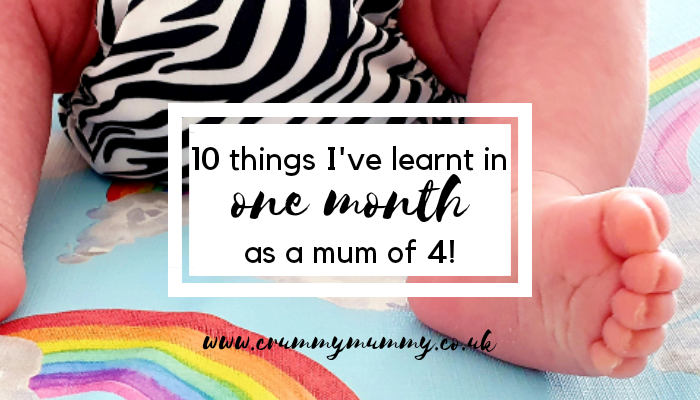 If someone had told me after baby number one was born that I’d one day be a mum of four I’d have laughed all the way home.

Yet 10 years and four babies later here we are: entering our second month as a family of six which is something I’m still getting my head around!

So, to mark one month of Violet Hope I thought it would be fun to share 10 things I’ve learnt in one month as a mum of four.

Not completely mad, but mad for having four kids. And I’m increasingly inclined to agree with them!

2. Two kids crying at the same time is nothing

If you thought two kids crying at the same time was bad (and when I was a mum of two I really did) try three – or all four. It’s got to be seen – and heard – to be believed.

3. Someone always needs something the moment you start feeding

You can put money on it. And it’s usually something they were perfectly capable of doing on their own before baby number four arrived, but suddenly need a grown up to help with.

I do it every time we leave the house or get into the car because I’m terrified of ‘forgetting’ one of them. Misery Guts reckons it’s only a matter of time, and I totally get how David Cameron left one of his in the pub.

5. Strangers mentally count you too

When I go out with the pram and the older children on their bikes and scooters I can see people mentally counting us. Every time.

6. Days out are going to get expensive

As a family of five we didn’t fit into the ‘2 adults, 2 kids’ family ticket criteria anyway, but now we’re a family of six we’ve broken the mould. I nearly choked on my tea when I discovered how much a tour of the Harry Potter Warner Brothers studio is going cost.

I’m not sure why it took me four babies to realise, but it did!

8. You find yourself saying ‘I only have one pair of hands’. A lot.

And the trouble is you could do with at least four pairs of hands. And eyes in the back of your head.

9. We should have bought a super king size bed

Because a king size bed is surprisingly snug with four little people in it. Of course it’s all our own fault for co-sleeping in the first place, but if anyone has any bright ideas for coaxing them back to their own beds I’d love to hear them!

10. The more the merrier

We might have our hands full; we might be outnumbered; life might be loud and chaotic and you might hear us before you can see us but the more the merrier. And I just know we’re going to have lots of fun.