They say every pregnancy is different, but what they don’t tell you is that it’s your first pregnancy that will be the best. 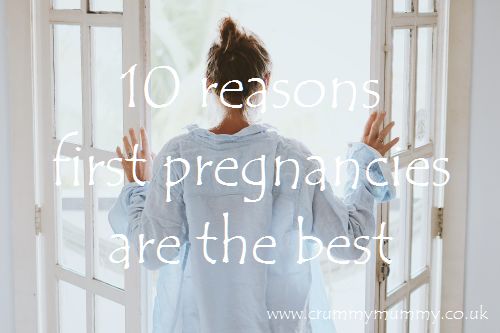 I’m now well into the second trimester with baby number three and a friend recently asked me if I was excited.

Of course my answer was yes, but to be honest I’ve barely had time to think about it thanks to already having two little people to look after.

If I’m lucky enough to get five minutes to sit down at home I’m interrupted by squabbling, screaming or someone needing their bum wiping, and as for finishing the working day and simply having a rest, forget it.

Which got me thinking that it really is your first pregnancy that’s the best.

I didn’t enjoy my pregnancy with Little B at all – having lost two babies between BB and Little B the whole thing was one long anxious wait – so now I’m pregnant again I’m determined to try and enjoy it this time. Even so, it just isn’t the same as it was the first time around.

1. Ignorance is bliss. If you haven’t been pregnant before you’ve got no idea what the coming nine months really hold; instead you can lose yourself in the pregnancy bubble of excitement and anticipation.

2. Shopping for baby items is a pleasure not a chore. The first time around you love nothing better than wandering around baby shops selecting the perfect items for you. After that you’d rather stay at home and do it online.

3. Without existing little people to look after you can absent yourself from proceedings as often as you like. You can get home from work and retire immediately to the sofa or bed, without having to do so much as lift a finger.

4. You can get the sleep your body so desperately craves. With subsequent pregnancies you’ve got to simply plough on regardless, never quite feeling like you’ve had enough.

5. You can spend time really getting to know your unborn baby. Whether it’s soaking in a nice warm bath, putting your feet up on the sofa or having a lie down, you’ve got the time on your hands to lie with your hand on your tummy and feel those lovely movements and kicks.

6. You can avoid making morning sickness worse. Thinking about and preparing other people’s meals and having to change dirty nappies are unavoidable if you already have littlies at home, and there’s nothing like having to prepare the kids’ tea to really set the nausea off.

7. You get to buy everything brand new. Assuming you kept everything from baby number one, it’s hard to justify spending £500 on the latest pram or £30 on that really cute Jo Jo Maman Bebe sleepsuit when you already have three.

8. You receive nothing but congratulations. When we announced we were expecting baby number three, some people not only asked if the pregnancy was an accident but also offered (in all seriousness) their commiserations.

9. The first time around your other half treats you with kid gloves. An unsolicited bunch of flowers here, a surprise pregnancy massage there. With subsequent pregnancies it’s business as usual. Boo hoo.

10. You will never look this good again. After you’ve popped one out there’s absolutely no going back. A friend, for whom English isn’t her first language, recently told me she’d never have a third because being a mum has ‘devastated’ her body. At first I thought she hadn’t quite got the right word, but nope, devastated is precisely what she meant to say.

Have you had multiple pregnancies and was your first the best? Or were subsequent pregnancies actually better?