What makes a true friend? 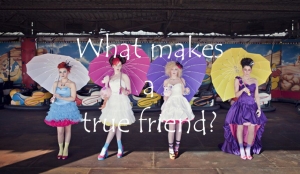 Good friends are like stars. You don’t always see them but you know they are there. Friendship is mutual dislike of the same people. Friendship is not a big thing…it’s a million little things.

The internet is awash with sayings about what makes friendship, but what actually makes a true friend? I ask because this week I was reunited with a friend from my childhood who I haven’t seen or heard from in more than 20 years.

We met in Germany, where our dads were stationed in the military, in the 1980s when we were eight. But after our families were posted back to England several years later we lost touch because it was before the days of the internet, email, mobile phones and social media. And we were only children, after all.

Then, out of the blue, she contacted me through Facebook after I suddenly popped up in her feed as someone she may know.

It turns out that all this time we’ve been living parallel lives just miles apart, and we didn’t even know it. She spent the rest of her childhood in the same county as me, literally just down the road, and we went to Universities in towns only half an hour apart. She got married in the same year as me to a man she’s been with as long as I’ve been with Misery Guts, and is now settled not far from where my mum and dad live. What’s more, her son is just a month younger than BB.

Yesterday we met up for the first time since the 1990s, and although two decades had clearly passed – there’s been births, marriages and deaths – it seemed like no time had passed at all. Which I guess is what makes a true friend – picking up where you left off.

The funny thing is I feel happy and sad about it. Happy that we’ve found each other again, but sad that all those years have been lost.

I’m going to try not and dwell on the past because there’s absolutely nothing we can do about it, and be glad that more time didn’t pass by before the Big Brother bods at Facebook finally worked out that our paths may have crossed at some stage and we might know each other.

Have you ever been reunited with a friend from your past?