Don’t worry, this isn’t going to be one of those posts featuring horror stories about bleeding nipples and mastitis. Well, it does include bleeding nipples, but not in the way you might think.

Like my post on the funny things they don’t tell you about childbirth, this is instead a reflection on things I’ve discovered while breastfeeding three babies, most notably what I’ve learnt in the first week. 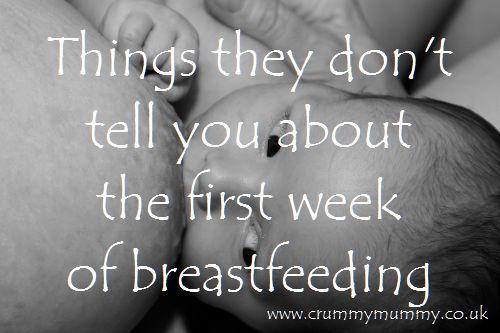 This time round I’m an ambassador for breastfeeding experts Medela, and as a #MedelaMum I’ve been asked to share an honest account of my breastfeeding journey. So here goes.

Things no-one tells you about the first week of breastfeeding

1. Don’t be surprised if your baby makes honking noises. Think a pig snuffling a truffle. The words snorting and grunting also spring to mind. Or perhaps it’s just my babies.

2. Cracked and bloody nipples are normal. I don’t care what they say about bleeding nipples meaning you’ve got the latch wrong – I’ve exclusively breastfed each of my three and each time I’ve had bleeding nipples in the first few days. We haven’t got the latch wrong and we are doing it right – it’s just that your nipples haven’t been used for a while, or perhaps not all. It passes within a day or so after they ‘toughen up’ and I’d hate for anyone to give up breastfeeding because they think they’re doing it wrong or it’s always going to be like that. Medela has some great nipple care tips for anyone at this stage of breastfeeding.

3. You’ll probably spend a significant amount of time unhinged. I don’t mean mentally deranged (although what with the sleep deprivation it can feel that way in the beginning) I mean literally unhinged. What with the burping and the resettling of the baby after a feed I often look down and realise I’ve been walking around with a boob hanging out for a good half an hour. Even the postman doesn’t bat an eyelid – he’s seen it all before. 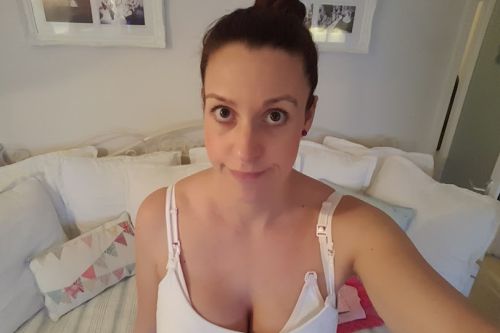 4. Not all breasts are created equal. I don’t mean your breasts and someone else’s – I mean your actual breasts. Don’t be surprised if, owing to milk supply and your baby favouring one side over the other, one boob is significantly bigger than the other. Thanks mother nature.

5. Not all breast pads are created equal. It’s taken me years to find a brand I actually get on with, my main beef being ones with too much paper around the edges making them scratchy. Try Medela’s disposable nursing pads which have a super soft lining.

6. Watch where you put your breast pads. When I’m feeding I take mine out of the side I’m feeding on and tuck it under one leg. Just don’t forget it’s there and get up to do something else. Coupled with the baby sick and goop that’s probably also about your person a soggy breast pad stuck to your thigh is not a good look.

7. Make sure you’ve got everything you need to hand before starting a feed. A drink of water, your phone (there’s absolutely nothing wrong with brexting in my opinion), the TV remote, snacks. Because you don’t know how long you’re going to be there and there’s nothing more infuriating than the thing you want being just out of reach and trying to get it with a baby stuck to your boob.

8. You’ll drink gallons of water. Forget taking a glass of it to bed with you – I take a 2-litre bottle.

9. Always have a minimum of two sets of nursing bras and tops. Because I’ve lost count of the number of times I’ve put on a clean bra and nursing top only to be puked on two seconds later.

10. By the end of the first week you’ll have mastered the art of doing pretty much everything one-handed. Chopping vegetables, going to the loo, eating your dinner. It’s just one of the many parenting superpowers you’ll develop in the first year.

Did you breastfeed your baby and was there anything unexpected you learnt in the first week? I’d love to hear what it was!

I’m proud to be working with Medela as a #MedelaMum sharing the ups and downs of my third breastfeeding journey. As always all opinions are my own and based on my own honest experience.