Things you can’t do now your baby is a toddler

The other day, when I was pushing Little B in his pushchair and trying to quietly rip open a Wispa bar and eat it without him noticing, it occurred to me there are suddenly an awful lot of things you can’t do now your baby is a toddler. 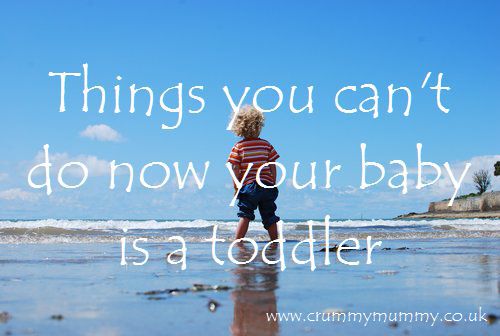 1. Secret eating. There’s no more scoffing a cheeky chocolate bar or a bag of crisps while you’re out and about. At the slightest sound of a wrapper crunching they whip round in their pushchair, craning their neck to see what’s in your hand and demanding a piece of the action. Bugger.

2. Skipping meals. If they happen to sleep through lunch or fall asleep at tea time you don’t bother making up for it. You just give them an extra big dinner or breakfast. But now they’re a toddler there’s no more winging it.

4. Swearing. There’s no more using words like ‘f**k’ or ‘Jesus Christ’ either. Because they will be repeated. In context.

5. Burping and farting. You can’t get away with doing either of these either really loudly or without acknowledgement. And definitely don’t laugh afterwards.

6. Using words like fart or bum. These must be replaced with ‘polite’ words like blow off, ‘parp’ and bottom.

9. Not brushing their hair. The good thing about baby hair is that you can get away without brushing it. But there comes a time they develop bed head and you really do need to brush it before leaving the house. Or suffer the disapproving looks.

10. Not brushing their teeth. A bit like skipping meals, it’s not a big deal if you happen to forget to brush their teeth one morning or night. After all, they’ve only got six. But the bigger they get you start stressing about sugar and raisins and rotting teeth and it becomes another chore to add to the never ending list.

Is there anything you could get away with when your baby was a baby but you can’t now they’re older? Or aren’t you there yet?