It turns out I was right not to write a birth plan.

After considering the pros and cons of writing one, and wanting the ‘perfect’ birth like last time but fearing writing my hopes down would mean the opposite would happen, I left the page completely blank ahead of Littlest B’s arrival on Valentine’s Day. 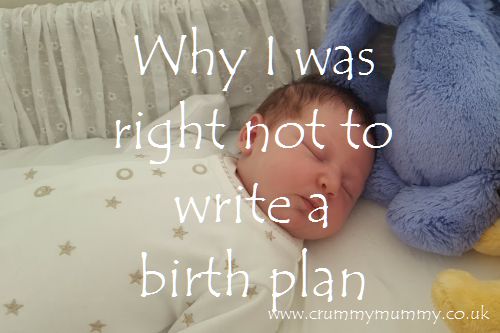 And it’s just as well, because we’d have fallen at the first hurdle.

When the time came to call the hospital to tell them we were coming in the unthinkable happened: the maternity unit was full.

Yep, there was no room at the inn.

In a matter of seconds the picture I’d built in my mind of travelling to our local hospital five minutes up the road, labouring in a birthing pool I could visualise because I’d been there before and recovering in a room overlooking the sea like I did with Little B evaporated.

We were off to a hospital 40 minutes away, not only in a different town but in a different county, to a birthing unit I’d never been to before and a maternity wing I knew nothing about.

And there’s a big difference between a 40 minute car journey when in labour and a five minute one. About eight contractions to be exact.

Can you imagine if I’d had my heart set on giving birth in our local hospital? Can you imagine the panic and uncertainty that might have set in as the plans came crashing down? It’s the sort of hiccup that could throw the best of us and send things heading in a completely different direction…

Of course there was nothing for it but to take a deep breath and get on with it – mainly getting there as fast as possible. While I knew there was a chance of being diverted to a different hospital if ours was full it didn’t occur to me it would actually happen, and we’d made no plans for this eventuality at all.

Needless to say googling the route while actually en route and in labour was a bad idea, as was the fact Misery Guts hadn’t filled up the car and the low fuel warning light flashed intermittently throughout the entire journey. But I digress.

Luckily the last minute change of hospital was the only part of the plan-that-wasn’t-a-plan that didn’t go according to plan, if you see what I mean.

When we arrived at the hospital the midwife asked me what my birth plan was, and I told her I wanted to have a water birth.

She looked at me expectantly, waiting for me to say something else, and I looked at her blankly.

After a pregnant pause (excuse the pun) she asked me what else I wanted, so I told her that was all. It seemed an awful lot to me, but perhaps the fact I hadn’t arrived armed with a tens machine, an iPhone play list and whale music meant I was an easy customer for her.

There was a birthing pool free, I was able to labour and give birth in the water drug-free as I hoped and I caught my baby and brought her to the surface myself. Which is all I could have asked for.

I still maintain that if I’d written down what I wanted it wouldn’t have happened, so I’m glad I left that page blank.

Did you have any unforeseen dramas like being diverted to a different hospital when you gave birth? Or did it all go according to plan?