How to establish a bedtime routine 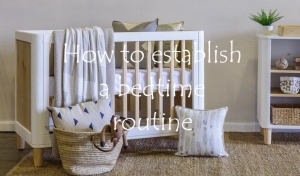 I THINK we may have done it. Famous last words of course, but after 16 months I think we might finally have got Little B into a bedtime routine.

Until now, for various reasons, he’d not only been going to bed when we went to bed but he’d also been going to sleep in our bed. This basically meant we had no evenings to ourselves at all, and no precious child-free hours in which to switch off and unwind.

So of course that had to stop, but the older he got the more of challenge getting him to go to sleep on his own in the early evening seemed to be. We were so strict with BB and she was sleeping in a cot in her own room at six months old. But with Little B being over one and used to sleeping in our bed I had no idea how to establish a bedtime routine and get him to do what she did.

With BB having to be up for school controlled crying wasn’t an option, and it’s not something I think I could cope with anyway, and he also seems to be a baby who just doesn’t need much sleep.

There are so many books out there about getting babies into bedtime routines, but they all seem to be geared towards new born babies, not ones who are older and have already got into ‘bad’ habits. So I thought I’d share what we did, and what (so far) seems to have worked:

1. Start slowly. I decided suddenly expecting Little B to go to sleep at 7pm in his cot when he had been used to nodding off on the sofa in my arms between 10 and 11pm was too much of a leap in one go. So to start off with, at 10pm when he would usually show signs of being sleepy, I took him into our bedroom, put him in his gro bag, turned off the light and fed him to sleep. (I know, I know – super nanny would not approve). I then did a boob to cot transfer which 9 out of 10 times has been successful.

2. Have winding down time as soon as tea is over. It should have been obvious, but Misery Guts coming home from work, turning Little B upside down and blowing raspberries on his tummy was not helpful.

3. Make bath time as soporific as possible. Lots of baby bubble baths have things like lavender and chamomile in them which are supposed to aid a restful night’s sleep. We’ve been using InfaCare’s new night-time baby bath after we were sent a bottle to try out, which has a gentle fragrance to help babies relax. I’m a fan of InfaCare because the bubbles last much longer than other brands and because it’s ph balanced it’s kind to skin too. 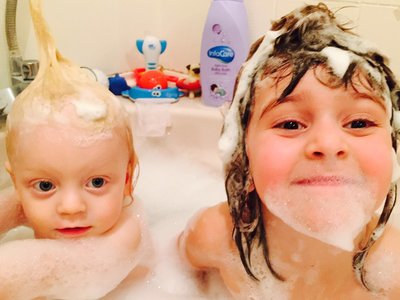 4. Make the last hour before bed quiet time. Previously Little B would be awake until he dropped, while we ate our dinner, watched TV and had all the lights on. In the hour before we wanted him to go to sleep we switched the TV off, turned the lamps down and made sure everything was nice and quiet.

5. Slowly bring the new routine forward. After successfully getting Little B asleep and in his cot by 10pm for three days in a row I gradually made bedtime earlier by half an hour, each time sticking to the new time for three days before making it another half an hour earlier. He’s currently going down at 8pm, meaning we’re finally getting our evenings back!

There is one minor detail I’ve failed to tell you about though: the cot is actually in our room right next to our bed!

So the next step is putting the cot back in his own bedroom, where it used to be, and getting him to sleep there. But like I said, it’s all about starting slowly…

Do you have any tips to ensure a successful bedtime? I’d love to hear them!