Hoburne Holidays: an honest review by a knackered mum

Eleven months, 13 days and about four hours. That was the last time we had a holiday, a proper get-away-from-home-for-a-week holiday.

After 21 months of breastfeeding Little B at all hours of the day and night while juggling work and a four-year-old, I don’t think I’ve ever been more knackered or been more in need of a break. 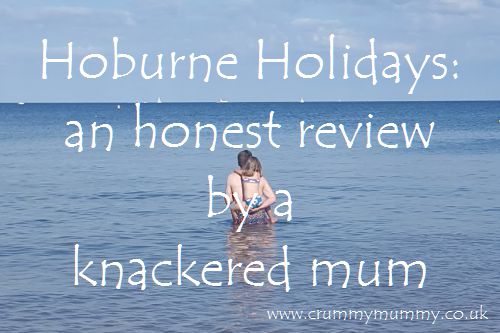 So when the team at Hoburne Holidays asked if we’d like to review their Devon Bay holiday park just outside Paignton, Devon, we didn’t need asking twice.

Think static caravans set in a shady holiday park overlooking the sea on the south coast of Devon.

A photo posted by Natalie Brown (@confessionsofacrummymummy) on Jul 26, 2016 at 1:44am PDT

There are a variety of caravans available, from standard two-bedroom caravans (from £628*) to superior and platinum plus versions sleeping up to six people, many of which are dog-friendly.

We were given a platinum plus caravan with three bedrooms (£1,229 for seven nights for a family of four this August*), gated decking (which can be locked so you don’t have any escapees), an open plan kitchen, dining and living area with TV and DVD player and a bathroom with an en suite loo to the main bedroom. 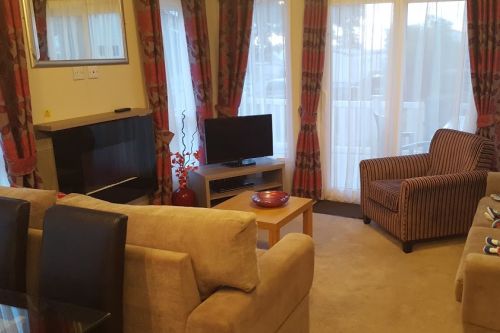 I was pleasantly surprised at the standard of the inside – recently refurbished, our caravan was more like a hotel suite than a caravan and it was absolutely spotless. 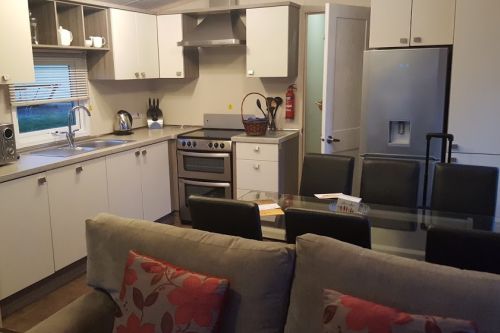 Linen and towels are supplied so you don’t have to worry about those, and in many ways the kitchen was better equipped than our kitchen at home – there was a huge cafetiere, the fridge freezer was bigger than our own and so was the oven (I was expecting camping size). 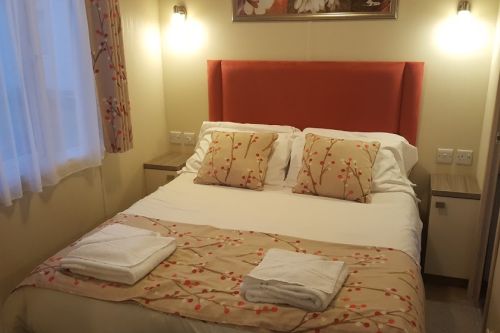 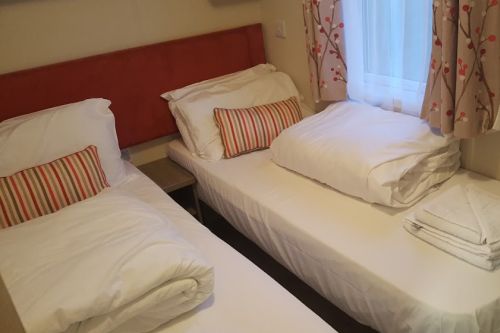 I was a bit worried about only having a shower as BB and Little B both have baths at home, but the shower was a double with a moulded built-in seat so it was easy to wash them without too much fuss.

The caravan was double glazed with central heating and an electric fire in the living room, so out of season I can imagine it being really cosy and warm.

There were also thoughtful touches like a little box with tea, coffee and sugar, a little bottle of washing up liquid and a j-cloth and dishwasher tablets so we didn’t need to rush out and buy anything straight away (although there is a park shop with everything you’d need), and colouring books with crayons for the kids.

There’s so much to do in the park I don’t know where to start! The kids absolutely loved the indoor pool, which has a flume as well as a sauna, steam room and fitness suite. 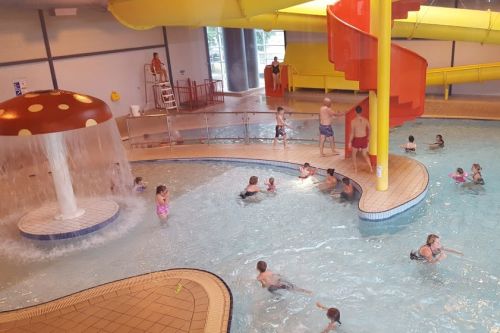 The water was the perfect temperature for little ones, and is lagoon-style so ideal for non-swimmers to play in the shallows.

I, meanwhile, loved the outdoor pool, which is heated throughout the summer. 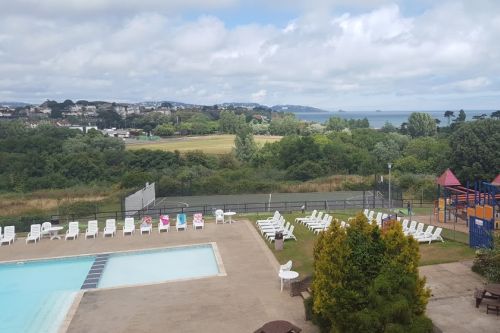 I swam in it every morning for half an hour which was a fab start to the day and what holidays for me are all about.

A photo posted by Natalie Brown (@confessionsofacrummymummy) on Jul 29, 2016 at 3:39am PDT

Outside there’s also separate adventure playgrounds for under sixes and over sixes, crazy golf and a nature trail where there are all sorts of animals from swans to butterflies and wild flowers including blackberries. 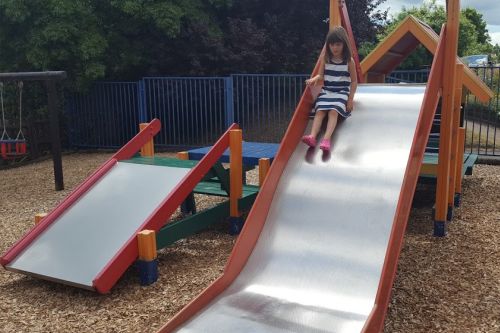 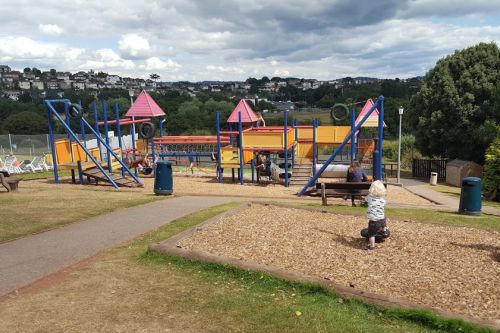 The main clubhouse has live music seven nights a week, kicking off with an appearance by Hoburne’s mascot Sammy the seahorse at 7pm every evening. 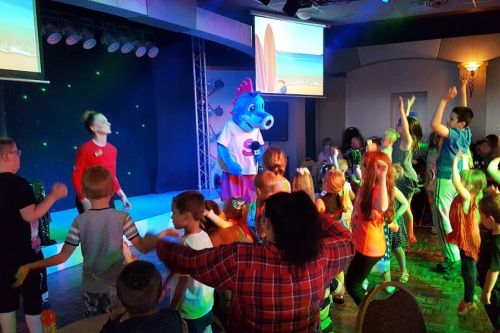 BB looked forward to this and the kids disco, which takes place before the main act of the evening, every day and being allowed to go to the disco was a great bribe during the day.

There are plenty of food options too, from a coffee-shop style cafe to a restaurant, snack bar and takeaway, and also a soft play which is open all day and so handy if the weather isn’t so good.

A photo posted by Natalie Brown (@confessionsofacrummymummy) on Jul 28, 2016 at 4:35am PDT

With so much to do at the park itself you could easily stay there your whole holiday without wanting – or needing – to venture out.

That said, Torbay has so much to offer from sandy beaches (a novelty for us living in pebbly Hove) to National Trust properties and of course the famous Dartmouth Steam Railway which runs along the coast, and you’d be missing out if you didn’t have at least one day out.

This really is a must for anyone with small children. A 20 minute drive along the coast from Hoburne Devon Bay (you’ll see Torquay on the way) Babbacombe model village is a collection of more than 400 miniature buildings and more than 13,000 model people (including Paul Hollywood and Mary Berry!) set in perfectly manicured miniature gardens.

Really recommend a visit to Babbacombe model village for anyone in or near Devon this summer – not sure who had more fun, me or the kids! #MyHoburneHoliday @hoburneholidays @hoburne @verytinytweets

A photo posted by Natalie Brown (@confessionsofacrummymummy) on Jul 27, 2016 at 9:10am PDT

There’s a little river and an electric train running through it, a fire breathing dragon and new for 2016 is a superhero mansion featuring all the iconic characters.

We ventured there one evening in search of a fish and chip supper, and we weren’t disappointed. Try Simply Fish on the harbour front which serves possibly the best fish and chips we’ve ever tasted.

A photo posted by Natalie Brown (@confessionsofacrummymummy) on Jul 28, 2016 at 1:15pm PDT

Every day the steam train chugs it’s way along the coast in front of Hoburne Devon Bay, and you get a bird’s eye view from the clubhouse.

We caught the train from Goodrington Sands to Greenway Halt, the stop for Agatha Christie’s holiday home Greenway, and back again and it was such fun!

We couldn’t come to #devon without a ride on the #stream #train! @hoburneholidays #MyHoburneHoliday #wishyouwerehere #family #fun #familydaysout #englishriviera #childhoodunplugged

A photo posted by Natalie Brown (@confessionsofacrummymummy) on Jul 30, 2016 at 6:37am PDT

The scenery was amazing and again the trip was worth every penny – £8.50 for adults, £5 for children and under threes are free.

The holiday home of Agatha Christie, Greenway House and Gardens on the edge of the River Dart is about 30 minutes from Hoburne Devon Bay and is now owned by the National Trust.

Parking is limited and you have to book a parking space in advance, so going by steam train or boat is recommended (we went by train).

The house is a short walk through gorgeous woodland from the station, and once there you’ll find walled gardens and the house containing Agatha Christie’s belongings including her typewriter.

A photo posted by Natalie Brown (@confessionsofacrummymummy) on Jul 30, 2016 at 8:28am PDT

We’re National Trust members so entry was free, but expect to pay £25.80 for a family of four if you’re not.

Goodrington Sands is the closest beach to the holiday park – you could walk it through the nature trail and it’s well signposted – while Paignton beach is a five minute drive, or a bus ride from the park.

The sand (which is red owing to the area’s Permian red rocks) was a real novelty for BB and Little B as they’re used to the pebbles of Brighton and Hove, and BB loved being able to make sandcastles, which you can’t do where we live.

A photo posted by Natalie Brown (@confessionsofacrummymummy) on Jul 31, 2016 at 8:46am PDT

And I loved just having five minutes peace while they played!

Before our trip to Hoburne Devon Bay I wouldn’t have said a static caravan on a holiday park with organised evening entertainment was really our sort of thing.

Ever miserable, Misery Guts declared our (by which he meant his) enjoyment would be determined by what our neighbours and the ‘other people’ were like.

I say don’t knock it until you’ve tried it. The holiday park was so peaceful we were barely aware of our neighbours, who were lovely anyway, and we both agreed it was the most relaxing holiday we’ve had since having children.

Everything has been thought of child-wise in terms of facilities so there was plenty to entertain the kids, and I didn’t feel like I had to worry about them tearing the caravan apart or breaking anything because it was all relatively child proof.

We also didn’t feel like we were shelling out money hand over fist for activities because the pools, parks, soft play and entertainment are all included.

BB actually cried when it was time to leave, and I know how she felt.

Listening to the steam train chew-chewing along the coast every day was the theme tune of our holiday – after just a few days Misery Guts’s face had visibly relaxed and the kids were loving having both of us on hand to play with them, and after a week we were all looking tanned, rested and as though we’d been abroad.

A photo posted by Natalie Brown (@confessionsofacrummymummy) on Jul 30, 2016 at 4:21am PDT

While £1,229 may sound like a lot of money for a UK holiday, I do think it was good value for money when you consider everything that was included.

And best of all, I’m a lot less knackered – which is absolutely priceless!

BB’s postcard to her Granny and Granddad pretty much sums it up – thank you Hoburne Holidays!

A photo posted by Natalie Brown (@confessionsofacrummymummy) on Jul 29, 2016 at 5:54am PDT

We were given a week’s stay at Hoburne Devon Bay free of charge for the purposes of review. As always all opinions are my own, and based on my own honest experience.