Pregnancy – and breastfeeding – have got lot to answer for in the boob department. Anyone who says they haven’t is lying.

Being pregnant with baby number three and having breastfed BB and Little B for a combined total of 42 months – or three and a half years – it’s fair to say my boobs aren’t what they once were. And nor would I expect them to be. 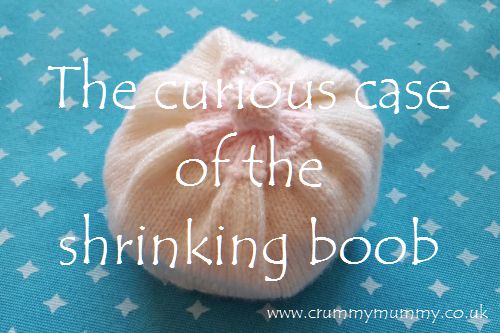 But what I didn’t expect was the latest turn of events: the curious case of the shrinking boob. Oh yes people, brace yourselves or turn away now. You’ve been warned.

Last year, when I was breastfeeding Little B, I wrote about things they don’t tell you about breastfeeding, which included the fact that one boob can be significantly bigger than the other owing to milk production and baby favouring one side over the other.

Now, having stopped breastfeeding Little B but being pregnant again, that very same boob, the one I silently cursed for being ludicrously inflated and skewing outfits out of all proportion for almost two years, has shrivelled like a three-week-old deflated balloon. (Don’t worry, I’ll spare you photographic evidence – pictured is my boobie beanie instead).

It’s probably all my own fault. After breastfeeding Little B for 21 months there was no break between stopping breastfeeding him and becoming pregnant again – indeed the only reason I stopped was because I was pregnant and doing the two things at once was all too exhausting.

So to be fair my poor boobs had no time to recover before being forced to get ready for another baby.

I shudder to think what they’re going to look like after they’ve been through it all a third time. I’m hoping someone will put me out of my misery and tell me it will all be alright, they’ll go back to normal (by which I mean equal) size once this baby production business is all done and dusted.