10 things they don’t tell you about raising a boy

We all know babies don’t come with manuals and being a parent doesn’t come with an instruction book (more’s the pity – I’d even have settled for Ikea-style 49 step diagrams). But the thing I’ve really been unprepared for is the difference between having a girl and having a boy.

Earlier this year I wrote about the real difference between baby girls and baby boys, and 10 months later, as Little B turns two, it occurred to me there are an awful lot of things I could add to this list now he’s a proper little boy and not a baby. 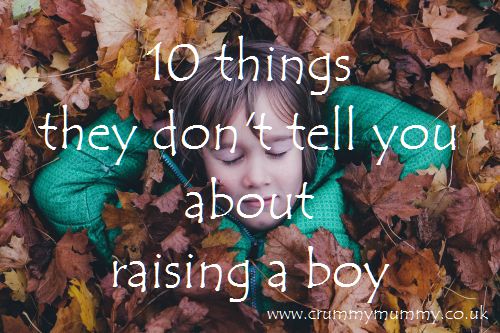 Of course I may be making some sweeping generalisations here, but this is what I’ve learnt after two years being a mum to a girl and a boy.

10 things they don’t tell you about raising a boy

1. They touch their willies all the time. Once they’ve discovered it, which happens earlier than you think, there’s no going back. And if you think a well-wrapped nappy is going to stop them, think again. Pulling, tugging, playing – you name it, they do it. And I’ve lost count of the number of times I’ve looked at Little B and thought what is that? only to realise it’s the nub of his dingle dangle sticking out of the top of his nappy. Nice.

2. They love boobs. I’m not sure if this is because I breastfed Little B, but he loves boobs. Whereas BB seemed to forget all about them within days of weaning, Little B still reaches for mine and asks for ‘more milk’. Worse still, he just loves to touch them. He’s not fussy either – any pair will do, they don’t have to be mine.

3. Clothes shopping will test your powers of creativity. Compared to all the girls’ clothes out there, you’re limited to trousers, shorts, tops and jumpers. If you want anything a bit different you’ll have to think creatively, and you’ll probably find you end up sticking to the one or two brands who actually do boys’ clothes well.

4. They love girls toys. Perhaps it’s because we already have a girl in the house, or perhaps it’s because they’re his sister’s toys, but Little B loves BB’s girly toys far more than she ever did. Her pink dolly pushchair, her baby dolls and tea set have all been played with more by him than her, and he’ll fetch a pair of my high heels to wear while playing too.

5. They don’t stop moving. Unless asleep, and even then they’ll do their best to use every available spot of cot at some point during the night. It’s exhausting.

6. They’re so rough. Or perhaps it’s just mine. Gentle is not a word in his vocabulary, as our poor cats will testify.

7. They can destroy your house in seconds. Books off shelves, the contents of drawers strewn across carpets and every cushion you own on the floor: all this can be achieved in the blink of an eye.

8. They love climbing. Turn your back for a minute or two and they’ll happily have scaled a book shelf, mounted the TV unit or climbed into the bath you haven’t temperature-tested yet. All with a cheeky smile of course.

9. They don’t stop eating. This is probably something to do with numbers 5, 6, 7 and 8 and the fact they never stop moving. I don’t know where my boy puts it, but he eats far more than his sister ever did at the same age. Goodness only knows what our food bill will be like by the time he’s a teenager.

10. They find farts instinctively funny. And once they’ve discovered how to do them on demand, like willy-touching there’s no going back.

Do you have a boy and have you found boys different to girls? Or do you have nothing to compare yours to? I’d love to hear about your experience!