Would you wear pyjamas on the school run? 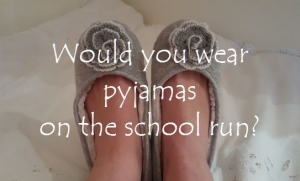 Would you wear pyjamas on the school run? I appeared on ITV’s This Morning debating the issue after a head teacher wrote to parents asking them to stop wearing their pjs and slippers to the school gates because she’s fed up with mums and dads shuffling up in their nightwear.

She reckons not dressing ‘appropriately’ is setting a bad example and not preparing kids properly for their own adult life.

Of course she has a point, and I’m all for setting standards – if Misery Guts hasn’t ironed BB’s collars properly I do them again for fear of what the teacher will think of  me – but I’d say seeing your mum or dad in jim jams on the school run is the perfect preparation for adult life: that it’s bloody hard work.

Does she have any idea what it’s like trying to get one or more children out of the door by a certain time in the morning? When you’ve got a baby due at nursery half an hour ago, a four-year-old insisting their pants are changed when they’re already fully dressed because they don’t ‘feel’ right and a husband on a short fuse because of the lateness and the pants?

Sometimes, despite your best intentions, it’s quite simply a case of them or you. Would she rather the kids arrived in their pyjamas instead?

I’m sure being ‘appropriately’ dressed does set a good example to kids, but so does looking like you’ve just crawled out of bed even though you haven’t. I know it might sound harsh but the fact is family life is one big juggling act – something’s always got to give – and the sooner they learn that the better.

What’s more, there’s nothing wrong with not being perfect all the time – what matters is that you did your best. Even if your best does mean arriving at the school gates in a onesie with unbrushed hair and sleepy dust still in your eyes.

What do you think? Would you wear pyjamas on the school run?

You can watch a clip of my TV appearance here and find out what it was like going on the show!