What’s the best time of year to get pregnant?

Apparently today is National Baby-Making Day (I’m not making it up, honest!)

According to a report from parenting website Channel Mum 10.36pm on January 2 is officially the most popular time of the year to fall pregnant. Which begs the question: what’s the best time of year to get pregnant? 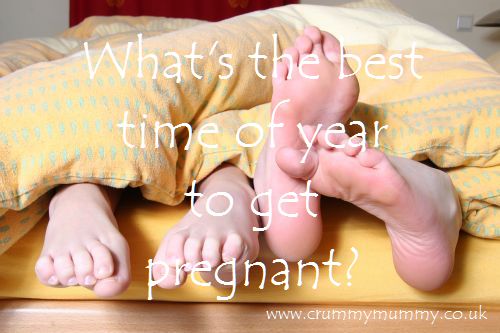 Official figures show the most common day to be born in the UK is September 26, which is 38 weeks – the average length of a pregnancy – after January 2.

How they arrived at the 10.36pm bit is beyond me (do we all go to bed at 10.30pm?) but more to the point why on earth would you plan to have a baby when everyone else is having one?

We’ve all heard the no-room-at-the-inn maternity unit horror story, and surely no-one with any sense would plan a September baby – I’m thinking the whole extra year of nursery fees. Would they?

Although we didn’t ‘plan’ any of ours – BB arrived a year after we married, Little B arrived following two miscarriages (and anyone who’s been there will tell you there’s no planning for that) and baby number three just sort of happened – I’m quietly pleased about when their birthdays fall.

BB is an August baby so hers is in the summer holidays, Little B is the end of October so in the half term holiday and it’s looking like number three may well arrive during the February half term break.

They’re also spaced evenly throughout the year and fall with decent intervals either side of Christmas, so perfect from a cost point of view (I pity any parent with two birthdays in the same month, especially when it comes to the dreaded class birthday parties).

Yet according to the report almost a quarter of parents want Christmas-conceived babies so their child is the oldest in the school year (one-upmanship is starting even before conception!) and 60% actively ‘try’ on January 2 because that’s when the drinking and partying is over.

Given this year January 2 is a bank holiday I shudder to think how over-stretched the maternity units will be come September 26.

Did you plan the birthdays of your children? Are you or did you have a September baby? I’d love to hear your thoughts!