What your Christmas cards say about you 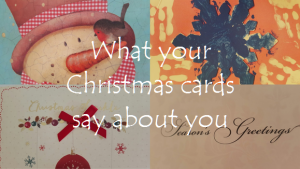 We’ve had a steady flow of Christmas cards landing on our mat over the last week or so. Little B is loving the increase in mail and runs into the hall as soon as he hears the letter box flip to collect whatever has been posted through.

It got me thinking that the type of card you choose to send says a lot about a person, and Christmas card senders can be categorised into distinct groups, a bit like nappy bag owners. At the risk of offending some of my family and friends – not to mention you, readers – I’ve attempted to categorise them.

So here’s what (I think) your Christmas cards say about you:

The first week of December sender

Cards from first week of December senders can be relied upon to drop onto the mat on or just after December 1st. They’re usually sent by stay at home mums and retired people who, naturally, have more time on their hands. That’s not a criticism, just an observation.

Thankfully, owing to the likes of Facebook which is the equivalent of a constant round-robin, round-robiner’s are a dying breed. There are still some culprits out there who insist on sending an annual family newsletter tucked neatly inside the card though. But sending a round-robin suggests you haven’t seen the recipient during the year, and if you haven’t seen them during the year it’s unlikely you’re that friendly, which means they’re unlikely to be that interested in the round-robin. No offence.

These cards are signed by each member of the household individually and tend to come from couples with no kids or super-organised mums. I’m always envious of these ones.

These would-be senders make a social media announcement several weeks before Christmas informing friends and family that they won’t be sending cards this year and instead they will be spending the money they would have spent on a donation to the local foodbank or homeless shelter. Sometimes this is backed up a few weeks later with video evidence on Facebook, and friends and family nod in approval and resolve that they too will do the same thing next year, while a small part of them laments the fact that the tradition of sending cards is dying out.

The two days after Christmas sender

There’s always someone who doesn’t make the last post. Cards from these senders tend to be hit and miss – some years one arrives and some years one doesn’t. These senders also tend to issue invitations during the year via text or email rather than the post, and they’re also flakey when it comes to thank you cards.

What do you think? Am I right? Or does this mean I’m going to struck off everyone’s Christmas card list from now on?!