What they don’t tell you about reception year 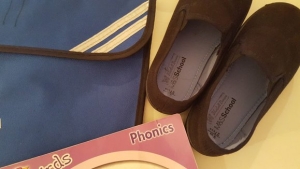 With the Christmas holidays underway I’ve been reflecting on BB’s first full term at school. It’s fair to say it’s been a steep learning curve, for me and for her. First there was all the things I needed to learn about having a child at school, then there was the school run and the realisation I hate it to get to grips with. Now I’ve been considering what they don’t tell you about reception year, and all the unspoken ‘rules’ I’m learning through trial and error. More error.

1. If you don’t send Christmas cards and/or presents to all 30 pupils in the class you’ll be the odd one out. Or more to the point, your little angel will be. And I’m not talking a chocolate coin tucked inside an envelope either. Cones of sweets wrapped with ribbons, party bags stuffed to the brim with goodies and homemade cookies are among the items BB’s been given alongside cards by her classmates. Better get my act together next year or risk scarring her for life.

2. ParentMail is a pain in the a**e. If you haven’t had the pleasure, this is a school-to-home communication system which you can use to book a slot at parents’ evening and report absences (this never works). The school uses it to tell you everything that’s going on. And I mean EVERYTHING. You get so many messages from ParentMail you stop reading them, until you miss something that’s actually important, like the fact you were in charge of savoury for the Christmas party, which was yesterday. Oops.

3. Free school lunches rock. One of the only good things to come out of the Coalition government, free school meals for four to seven-year-olds means there’s no need to make a packed lunch. So far I’ve had to make just the one, when the older kids were having their Christmas party so the younger ones had to eat in their classroom, and it was a right faff. I couldn’t be doing with that every day.

4. PE kits need washing more often that you might expect. Given BB has PE twice a week, once inside and once out, I thought taking the whole lot home every three to four weeks and washing it would be enough. Wrong. It STANK. I’m surprised we didn’t get a letter home complaining about it. Or perhaps we did, via ParentMail, and I didn’t read it.

5. The Christmas nativity play is a scrum. Parents start queuing a good 45 minutes before the curtain is due to go up in order to bag a seat, and when the doors open all hell breaks loose in the race to the front. However, the seats in question are child-size so unless you make it to the front row you’re not going to be able to see a thing. Better not to bother and just stand at the back for a birds’ eye view instead. And quick exit afterwards.

At least I’ll know what I’m doing by the time Little B starts school. I hope. Is there anything you wish you’d known about reception year?