What they don’t tell you about live TV 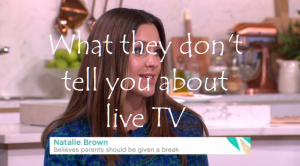 The big news in the Crummy Mummy household this week is that I was asked to appear on ITV’s This Morning to talk about whether it’s ok to wear pyjamas on the school run (in my opinion it totally is!) I was excited on two counts: getting to meet Phillip and Holly (last time it was Ruth and Eamonn) and getting a plug for Crummy Mummy on TV.

Except it didn’t quite work out that way. Here’s what they don’t tell you about live TV:

1. There’s only a matter of seconds between PR triumph and PR disaster

The stage was set: my blog post was live, I’d told everyone I knew I was going to be on TV, I was tweeting, Instragramming and Facebooking the relevant hashtag and charting everything on social media. All I had to do was mention Crummy Mummy during the interview and the blog I work so hard on would be brought to the attention of hundreds of thousands of viewers – many of whom are my target audience – across the nation. Simple. So what did I do? You guessed it: I didn’t mention it.

It’s not that I didn’t try: I really did, but after my opening gambit the time just ran away and suddenly it was all over. If I had a spin doctor they would have their head in their hands. (I keep hearing Del Boy Trotter in my head saying ‘Rodney you plonker!’)

I found it hard to get a word in edgeways and should have been more assertive by cutting in with my own point of view. But I didn’t, because I’m too polite. Which got me nowhere. 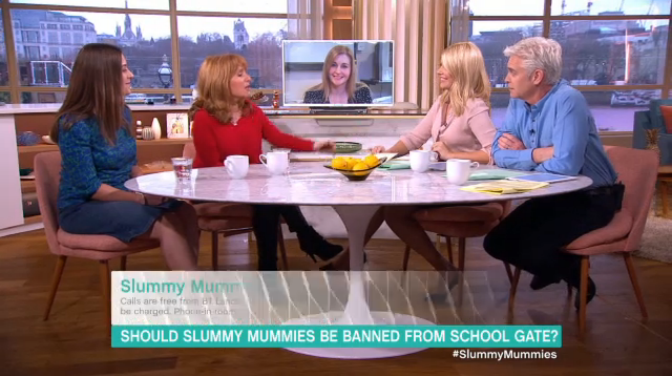 3. Say something controversial and you’ll get trolled on Twitter

Within minutes of leaving the studio my fellow interviewee Angela sent me a friendly tweet advising me to ignore the trolls. What trolls? I thought. A quick Twitter search with the hashtag told me all I needed to know. Apparently BB must have ASD because she has tantrums getting ready for school in the morning, and we must be late for the school run because I’m too busy applying to be on the Jeremy Kyle show. I won’t bore you with the others.

But on the up side:

With make-up professionally applied and your hair done for you you can shed your mummiform of leggings and a vest top (or pyjamas!). You’ll be transformed from a knackered, invisible unpaid servant who spends more time than you ever thought imaginable wiping into someone in heels and an outfit featuring no traces of child emissions with something important to say. 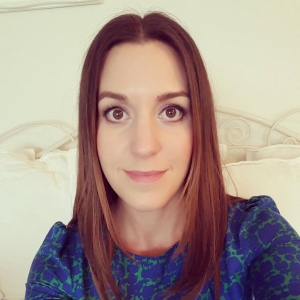 Back home after a fab morning @itvthismorning – WISH I knew how to do make up like this!

You get to meet famous people (Holly is every bit as lovely in real life), see what goes on behind the scenes (all the celebs congregate in the kitchen) and you’ll be on an adrenaline high all day (even if you do feel like you fluffed it).