What NOT to do when hosting Christmas for the first time 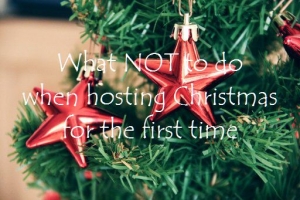 We’re taking the plunge: this year we’re hosting Christmas dinner for the first time since becoming a family.

They say you should leave Christmas dinner to your parents for as long as possible, and there’s a lot to be said for that, but with BB and Little B growing fast the thought of taking all the Father Christmas presents with us and then lugging them back again, on top of even more from friends and family, was too much.

It’s time to stay put and start our own tradition, so my in-laws are joining us for lunch and we’re in charge.

The trouble is that the fact we don’t need to be wrapped and packed and ready to jump in the car and drive half way across the country by Christmas Eve means I’ve been rather lackadaisical in the planning department. I’ve felt like there’s been loads of time left to organise everything…until suddenly there isn’t.

So here’s what NOT to do when hosting Christmas for the first time:

2. Don’t leave it until two days before Christmas to book the online food shop. There’s a reason why your mum stays up until one minute past midnight four weeks before the big day in order to bag the desired slot.

3. Make sure everything works in the kitchen. It turns out two of the four hobs on our electric oven are broken. So basically only half of it works. I did know this, but what with mumnesia brought on by more broken nights than I can count I’d completely forgotten until Misery Guts helpfully pointed it out, with no time left to spare to sort it out.

4. Ensuring you’ve got all the right equipment helps. How have we got almost six years into married life without a carving knife and fork, a dish with spikes on and a gravy boat big enough for more than two people? The plastic jug we use to wash BB’s hair will have to suffice.

5. Click and collect sounds far, far simpler than it actually is. Especially when you’ve left it until the last minute to track down a singalong Elsa doll.

According to Skipton Building Society more than 3.2 millions Brits will be hosting Christmas Day for the first time this year.

Top 20 worries include not being able to fit everything into the oven, not getting the timings right and tolerating certain family members for a whole day. What was your biggest worry when hosting Christmas for the first time?