To the lady in the supermarket

This probably isn’t going to be the classic supermarket tale you think it is. 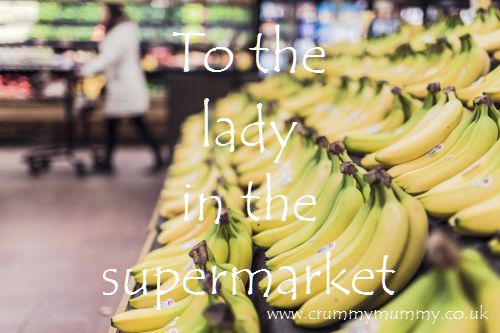 Well, I probably was judged, but not by the old lady.

To the lady in the supermarket

Let me set the scene: it’s midway through the Easter holidays, I’m tired, the kids are going a bit stir crazy and we need to go to the supermarket.

It was nap time so I strapped a heavy-lidded Little B into the pushchair, popped Littlest B into the cot underneath and took BB’s hand, safe in the knowledge that two out of three of them would be asleep by the time we got there.

Why do they put the kids’ magazines right by the door so they clock them as soon as you walk in?

Why do they offer free fruit with a great big picture of juicy looking satsumas only to leave the flipping fruit basket empty?

And why do they put toys on the ends of food aisles so you’ve got no choice but to navigate them in order to get tea?

Just like the ‘tools’ in crafting kits I’m sure someone somewhere is laughing at us – probably the security guards watching on cameras in the control room. Anyway, I digress.

Due to the aforementioned kids’ magazines I wouldn’t buy (the school holidays require you to shell out money hand over fist as it is), the free fruit I couldn’t appease him with, and the toys in the meat aisle he couldn’t have, what started out as a wail of protest from Little B slowly but surely escalated into a tantrum of epic proportions.

By the time we made it to bread his screams were reverberating around the tin roof of the supermarket and there wasn’t one part of the store in which he couldn’t be heard.

He was kicking, he was shrieking, he was stamping and he was throwing himself backwards and forwards in his throne on top of the pushchair while poor Littlest B slept underneath.

Of course by this stage there’s absolutely nothing you can do. No amount of reasoning, placating or begging is going to calm them down and restore peace.

There’s nothing for it but to put a smile on your face (whatever you do don’t forget to smile – I swear there’s nothing your fellow shoppers want more than to see you have a meltdown too). Don’t make eye contact and get out of there as soon as possible. Think Dale Winton spurring you on in supermarket sweep.

It was as we left bread and I was trying to hot foot it to the tills that we encountered an old lady, peering at us from over the top of her spectacles. But instead of sagely declaring Little B was hungry or tired or both in the disapproving manner you usually get in these situations, she instead produced a banana and offered it to him.

This was so unexpected it prompted a temporary pause in the meltdown, and you could see Little B suspiciously weighing up the pros and cons. As he was doing so she took another banana from her trolley, peeled it and promptly started to eat it right in front of him. At which point he happily accepted her gift.

So after all that it wasn’t the five quid magazine that appeased him and it wasn’t the eight quid Thomas toy either – it was a 10p sodding banana.

The collective sigh that went round the supermarket when he finally stopped yelling was practically audible, and to the lady in the supermarket: thank you.

Thank you for stopping my son crying, thank you for not judging me and thank you – on behalf of everyone who was in the store at the time – for restoring peace.

So what’s the moral of the story?

Has anyone ever come to your rescue in a supermarket? How do you deal with supermarket-induced tantrums? I’d love to hear your coping strategies!