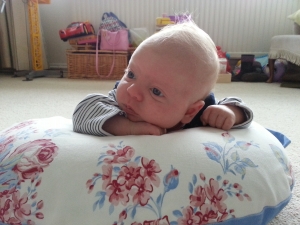 I used to think nursing pillows were one of those things they try and sell you but you don’t really need. That was until I started back at work nine weeks after having a very hungry baby. So when MadeForMums asked me to review a Thrupenny Bits nursing cushion (so called because it’s cockney rhyming slang for you-know-what) in which you’re supposed to be able to feed hands-free, I jumped at the chance.

And would you adam and eve it, you really can (pictured)!

The pillow comes in two sizes, small and large, which you lay in your lap. There are two straps which you tie around your waist to secure the pillow, meaning, unlike other cushions on the market, there’s no gap between you and the pillow which the baby can slip into.

With the pillow on your lap you then place the baby on top, tummy to tummy, and I found my large sized one gave me the perfect level for breastfeeding Little B, especially when he was tongue tied and his face needed to be right in front of my boob, rather than reaching up from the crook of my arm.

It will also last you during breastfeeding and beyond – as well as being a breastfeeding cushion, it can be placed around your baby for support as he’s learning to sit up, or for tummy time (pictured), and later on the inner cushion can be removed and the outer cover converts into a bag. 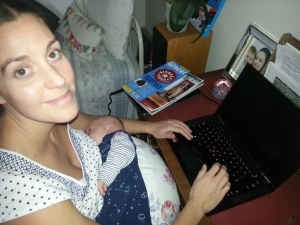 At £65 mine is quite expensive, but it’s made of really good quality, luxurious feeling fabric and there are other options starting from £33 if you don’t want to spend so much. And although it’s marketed as a breast feeding pillow, don’t be put off. I think it would also help with bottle feeding and anyone recovering from a caesarean.

Want to know more? You can read our full review over at MadeForMums here