Things they DON’T tell you about breastfeeding 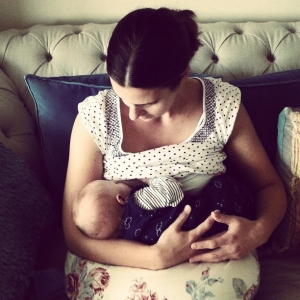 Little B will be one next month (don’t know where that went). We’re still going strong on the breast feeding front, and like his sister he’s showing no signs of dropping any feeds.

We’re still up every few hours during the night, and overall I’d say we’re on as many feeds as we were when he was a newborn (Gina Ford would not approve).

As I’m sure anyone who’s breast fed (or tried to breast feed) will tell you it’s a total learning curve, and one sibling can be completely different from the next.

Having now breast fed for almost three years of my life I thought I’d bring you the things they DON’T tell you about breastfeeding:

1. One boob can be SIGNIFICANTLY bigger than the other. I’m talking several cup sizes bigger. My left boob produces far more milk than my right and as a result is HUGE, while my right one looks pretty much the same as it did pre-pregnancy. Weirdly, it was the other way round with BB.

2. Somewhere around nine months, when your little bundle of joy develops his pincer movement, he’ll start trying it out on your nipple. With a big smile on his face.

3. Ditto when he discovers holes and likes sticking his finger inside them. I keep my belly button firmly covered.

4. The bigger the baby gets, the more people have a good look when you breast feed in public. When he was a tiny baby no-one batted an eyelid: now he’s big and strapping and almost walking people do a double-take.

5. The bigger they get the more milk they consume. I always thought that once you start weaning they’d drink less milk because they’re eating food as well, but that hasn’t been the case with either of mine. Little B is now drinking more milk than he ever has before. Last week I was so hungry I ate a fry up at 10.30am despite having had breakfast at 8am.

Did you breast feed your baby, and if so, can you relate to any of these? And is it the same with bottle fed babies?