Things to do in London in half term

Are you wondering how to entertain the kids this half term? Does a little trip – and treat – the whole family will enjoy sound up your street? Then read on!

The Arch Hotel in London is offering families a VIP stay at their 5-star hotel during half term week with a family fun package featuring little touches like child-sized bath robes, kids’ bathroom products and milk and cookies at bedtime. 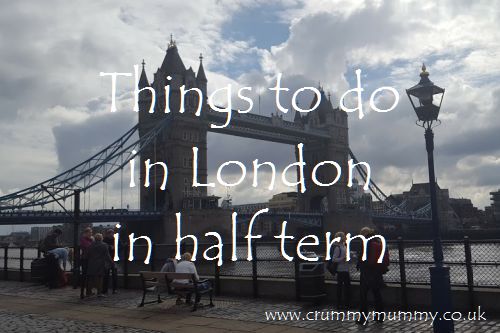 The words 5-star hotel and milk and cookies at bedtime in the same sentence sounds like an excellent idea to me, so of course when we were asked if we would like to go and see what all the fuss is about the answer was yesssss!

It’s hard to picture I know, but The Arch has pulled it off. My first thought when I looked at the website with mirrored coffee tables and plush furnishings was who in their right mind would take kids here, but on arrival I quickly realised it’s the relaxed atmosphere and friendly staff – as well as the thoughtful little touches – that make it child-friendly.

A photo posted by Natalie Brown (@confessionsofacrummymummy) on Oct 7, 2016 at 10:34am PDT 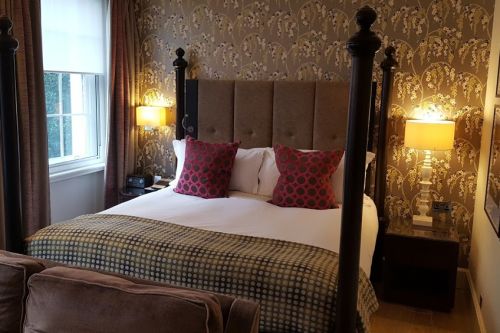 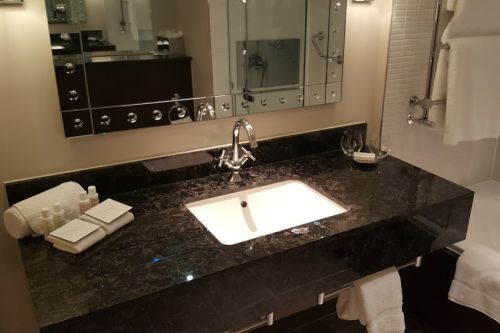 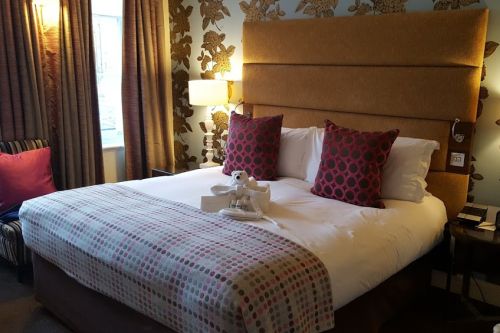 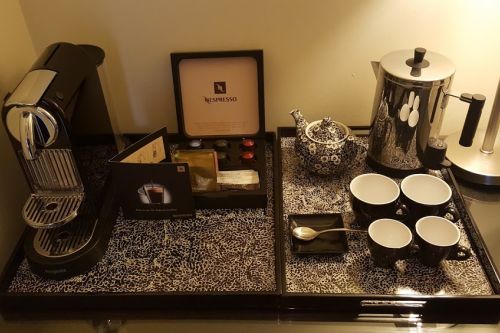 There was a gorgeous plate of macarons to greet us on arrival and BB’s eyes nearly popped out of her head as she’d never seen anything quite like it. To be honest neither had I!

A photo posted by Natalie Brown (@confessionsofacrummymummy) on Oct 7, 2016 at 9:47am PDT

Even Misery Guts cheered up when he discovered a TV at the end of the bath from which he could have a soak, drink a cold beer and watch Top Gear. 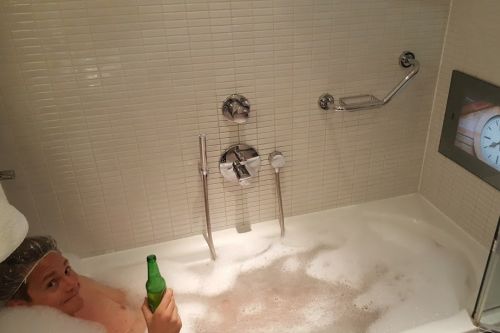 The hotel’s restaurant Hunter 486 (named after the 1950s dialling code for Marylebone) looks like something out of a Bond film with padded leather booths, curtains for privacy and swanky décor. But don’t let this put you off taking your whirling dervish there – there’s colouring books on hand to entertain the kids and child-sized cutlery which I think is a really thoughtful touch for a high-end hotel.

The package includes a free kids’ meal with every adult main course, and the menu is fine dining-style (think soused mackerel with horseradish cream, crab with pink grapefruit and flat iron steak) but with food the kids will actually eat (fish and chips and pizza). 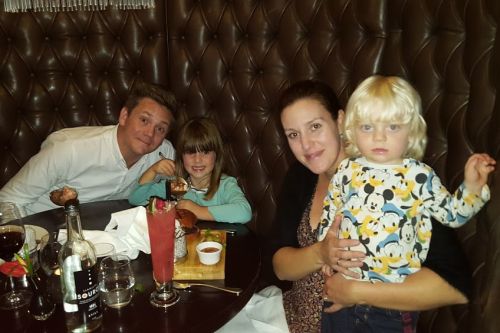 There’s also a martini library, a gym and reception area with a toy chest bursting with toys and games for kids of all ages.

The package also includes a full English breakfast the following day, served in the restaurant, and when I say full I mean full. There’s absolutely everything you can think of, from honey you actually scrape from the comb yourself to artisan breads, Bircher muesli in Kilner jars, fresh and dried fruit and all sorts of pastries.

A photo posted by Natalie Brown (@confessionsofacrummymummy) on Oct 8, 2016 at 1:21am PDT

The cooked menu is equally impressive, featuring everything from porridge with spelt and quinoa to Canadian pancakes with bacon and maple syrup and of course the full English.

Once again – and quite uncharacteristically for that early on a Saturday morning – Misery Guts had a smile on his face. 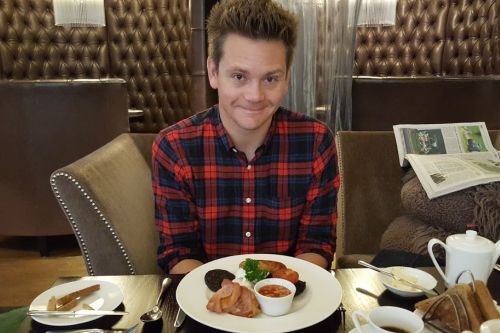 The hotel is in Great Cumberland Place, just a stone’s throw from London’s Marble Arch and is the perfect base from which to explore London. Minutes from Hyde Park, Oxford Street, Regent Street and Bond Street, the hotel is really central for everything.

The Tower of London

BB had been asking to see the Crown Jewels for months so after our stay at The Arch we headed to the Tower of London so she could see them for herself. This isn’t the cheapest day out – you’re looking at £62 for a family of four with one child under five – but if you book online it’s cheaper and you also avoid the queues for tickets at the gates. 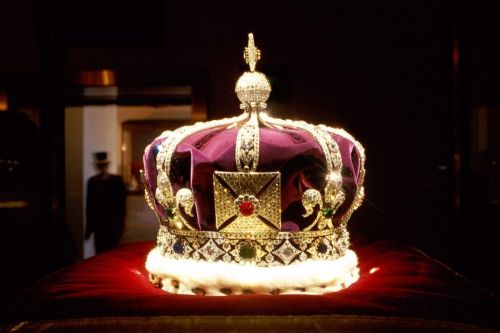 If they’re a bit overexcited and you want some quiet time head to the cinemas in Leicester Square. There are lots of films on over half term – we visited the Odeon where we saw the new Trolls movie, complete with actual Trolls at the door!

Rounding off our trip to #london with a special #bfilondonfilmfestival preview of the new #DreamWorksTrolls film!

A photo posted by Natalie Brown (@confessionsofacrummymummy) on Oct 8, 2016 at 6:09am PDT

The West End musical Wicked is taking over Ripley’s Believe It Or Not! museum at Piccadilly Circus from Saturday October 22 – Sunday October 30 with a child-friendly Halloween experience. There’s face painters, balloon artists crafting balloons into broomsticks and witches hats and more than 700 artefacts over five floors – including shrunken heads and rare animal skeletons. Tickets are £65.39 for a family of four with one child under four if you book 1-13 days in advance, but there’s currently 15% off if you book online.

Two kids go free with each paying adult visiting the View from the Shard in London Bridge Street during half term week, from Saturday October 22 – Sunday October 30. You can see the Houses of Parliament, the Tower of London, the London Eye and Buckingham Palace all at the same time from London’s highest viewing platform. Adult entry is £25.95 when booked in advance. 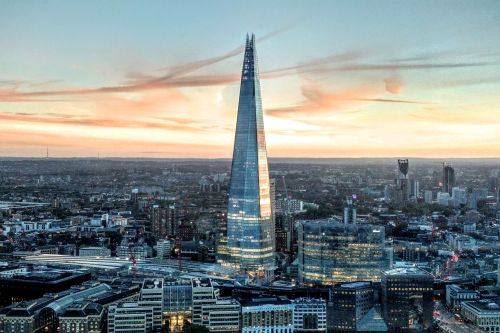 Kids can find out what it’s like to be a scientist for the day throughout half term week at the Natural History Museum by exploring hundreds of real life specimens and speaking to the museum’s ‘science educators’ who are on hand to help. The event is drop-in so you can go any time between 11am and 4.30pm each day and even better entry to the museum is absolutely free! 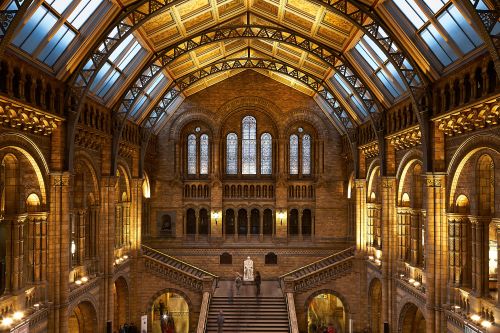 Until we visited The Arch my idea of staying in a 5-star luxury hotel was most definitely without the kids, but I stand corrected.

Everything was made easy and although Little B left his fingerprints all over the mirrored coffee tables and the kids dropped crumbs from their cookies everywhere I didn’t feel like we were an inconvenience or we were somewhere we shouldn’t have taken the kids.

The family package The Arch is offering for half term is from £390*, which I think is really great value for money considering everything it includes and everything we experienced – the hotel was an oasis of calm for the whole family, as well as a luxury treat.

Have you ever taken your family to stay in a 5-star hotel? What was your experience?

We were given a night’s stay at The Arch Hotel in exchange for this review. As always all opinions are my own and based on my own honest experience.

*Prices correct as of October 2016