Things I wish I’d known as a new mum 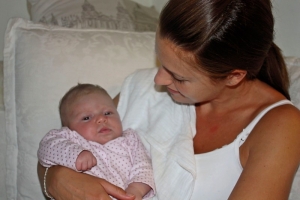 They say confidence comes with age, but as far as parenthood is concerned for me confidence came with each sleepless night, each explosive poonami and each temperature-fuelled bug I dealt with. This is me with an eight-week-old BB in 2011, wet behind the ears (me, not her) and suddenly in charge of this tiny little thing who was completely dependent on me.

Research by Nurofen for Children has revealed that on average it takes a new mum six months to feel confident as a parent, and that new mums are more likely to ask their own mum for advice on their child’s health than their doctor.

I certainly did: considering my brother and sister and I survived a time when the idea of a car seat was strapping a carry cot onto the back seat of the car and the night-time remedy for colds was putting a naked flame in a vaporiser in our bedroom I figured she must know what she was talking about. I don’t think I cut BB’s nails until she was at least a few months old – I was so terrified of nipping the ends of her fingers I got my mum to do it.

It’s only now that I’m a mum of two that I realise how much more confident I am second time round. As well as the differences between first and second babies there are lots of things I wish I’d known as a new mum:

1. The reason babygros have split shoulders is so that you can shimmy them down the body instead of over the head in a poonami/puke situation. A friend pointed this out when BB was about a year old – until then I had no idea that’s why they’re like that. To think of all the poo in hair I could have avoided!

2. You’ve got nothing to prove. Celebrities might dart back to work weeks after giving birth in pre-pregnancy clothes but that doesn’t mean you have to. I’ve said it before, but I wish I’d sat around in my pyjamas watching daytime TV more when I was on maternity leave because the tiredness did catch up with me.

3. More day-time sleep doesn’t necessarily make for a sleepless night. I used to go out of my way to avoid car journeys which would send BB into a motion-induced sleep, and then spend the rest of the day worrying about what the night would be like. Nine times out of ten she’d sleep as normal despite the extra day-time nap.

4. You don’t need half of the things lists in magazines will have you believe. Hats for indoors, scratch mittens that just fall off and loads of baby towels – these are all baby items you really don’t need.

5. Don’t be afraid to medicate. The baby I mean, not you. When I had BB I was so determined nothing but milk would pass my exclusively-breastfed baby’s lips unless it was absolutely necessary that I made life far harder than it needed to be. Over-the- counter medicine like Nurofen for Children is the difference between a broken night and a peaceful one; a grizzly, fractious teether and one that takes it in their stride and a difficult 24 hours after those milestone jabs or a normal day.

Is there anything you wish you’d known when you were a new mum?

I am a member of the Mumsnet Bloggers Network Research Panel, a group of parent bloggers who have volunteered to blog about a specified subject or review products, services, events and brands for Mumsnet. I have editorial control and retain full editorial integrity. I have been entered into a prize draw to win a £100 voucher as a token of thanks for this post.