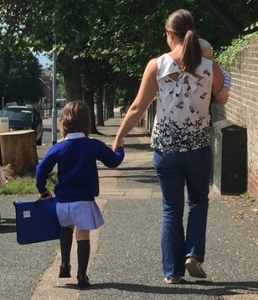 It’s now BB’s second week at school and to say it’s been a learning curve for me is an understatement. Once the novelty of the school run wore off around this time last week it began dawning on me what the advent of big school actually means.

It means getting to grips with after school clubs, birthday parties and ironing (not one of my strong points).

These are the things I need to learn now I have a child at school:

1. Don’t leave it until the weekend before term starts to read the gumpf you were given last term about after school clubs.

The popular ones get booked up and as a result BB is on the waiting list for a musical theatre club which several of her new-found friends skip off to after school. When she asked why she couldn’t go I told her it was because the class was full and there might be space next term, but the real reason is because I didn’t read the information I was given at parents evening in July = one very guilty mummy.

2. How to throw a birthday party.

We already have one party involving the whole class under our belt, and oh my goodness I’ve got a lot to learn. This party was seamless. The mum in question had thought of everything: a children’s entertainer, lunchboxes bursting with delights for the kids, a cheese board for the grown-ups and personalised thank you stickers on the goody bags. And not only this, the event was so well organised that when I would have steam coming out of my ears she flitted calmly among the parents making sure all our details were correct for a round-robin class contact list she’s created. Yikes.

Double French plaits, perfectly symmetrical bunches and buns without a wisp out of place. I don’t know how the other mums do it. BB has always had short hair because, until now, she’s flatly refused to wear anything resembling a clip or bobble, but as predicted; now she’s seen the many and varied styles of her school friends, she wants them too. I can’t even French plait my own hair. Better get You Tubing.

For me, not BB. Again, as I peer down at the leggings and tunic top I’ve worn two days in a row (sprinkled with baby snot if you look really closely) I don’t know how some of the other mums do it. Effortlessly glam and perfectly make-upped, they look immaculate every day. Without a doubt the day I appeared on This Morning and did the school run straight from the studio is the most glam I will EVER look on the school run. Perhaps I’ll make a cardboard cut out of my face that day and wear it as a mask. Which actually isn’t a bad idea…

‘Crease-free’ and ‘non-iron’ – don’t believe any of these labels on school clothing. They aren’t. It’s a Big Fat Lie the supermarkets use to lure you in. Even worse, BB’s little blouses are tiny with tiny capped sleeves and tiny collars. How to iron them properly is beyond me.