This time last year I wrote a post about why Christmas is better with kids. From mince pie making to kids’ chocolate, I do think Christmas takes on a whole new meaning – and lots of fun – once you become a parent. 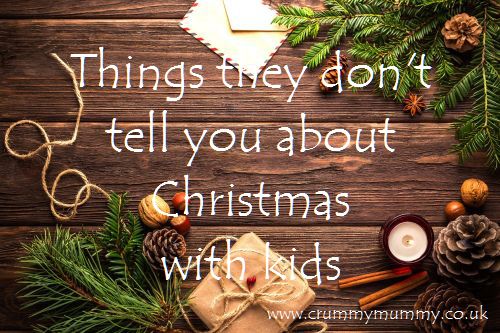 1. Advent calendar foil. Every morning I trail around the living room picking up bits of dratted chocolate advent calendar foil from the carpet. Instead of ripping it off in one piece the kids somehow manage to shred it into a zillion little pieces. Is it really necessary to cover the chocolate in foil anyway? It’s not as though it’s going to be hanging around for very long…

2. Paper snowflake cuttings. You know the ones: tiny triangles, squares and circles which somehow make it over the entire living room even though you specifically asked them to cut them out over the table. Bad news if, like us, you’ve got a vacuum cleaner on its last legs.

3. Fake snow. If you’ve been to a Santa’s grotto or a Christmas experience like LaplandUK the chances are you’ve taken home a fair amount of the scenery with you. Fake snow is the worst offender – it sticks to everything and doesn’t like to go up the vacuum cleaner either. (In fact it might go some way to explaining why our vacuum cleaner is on its last legs).

4. Christmas card ‘accessories’. If you’re one of those parents who thinks it’s clever to put glittery stars/baubles/holly in Christmas cards so they ‘sprinkle’ out on opening I could cheerfully throttle you. It’s not clever and it never will be.

5. Chocolate coin wrappers. You’d think the design of these might have evolved, but apparently not. Be prepared to deal with both a child screaming in frustration because they can’t get into it, and chocolate lodged firmly under a finger nail because you’re forced to do it.

Are there any by-products of Christmas with kids driving you potty this year? I’d love to hear them!